These days Moscow is anticipating one of the most significant day in the history of Russia, the day of Victory. 9th May is widely celebrated all over our country. Parades, concerts, veterans' greetings are held all over, though probably the grandest ones take place in the capital. 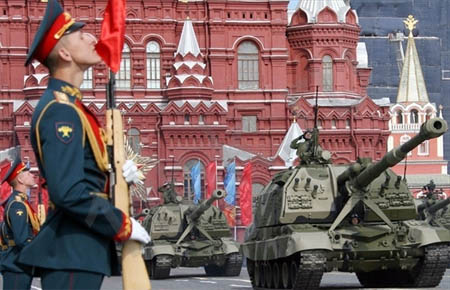 The main event on this day is the parade on Red Square. Each year it is unique. It gathers many foreign guests and delegations, the heads of different countries. As a result, common people, mainly Muscovites, can not witness it on the main square of our country. Only those who have invitations (mainly veterans, their relatives  and vips) can observe this spectacle  from the stands on Red Square.  However,  you can be lucky to see rehearsals before these celebrations if you happen to be on your Moscow tour in late April and the beginning of May.

The history of military parades on Red Square dates back to the Soviet epoque. The first military parade on the major square of the Soviet capital was held on 1st May. Accepted by Lenin, it demonstrated the power and mightiness of the Soviet state. During the years of  WWII parades were terminated for a while. In November 1941 its participants went straight to the front since the city was practically besieged. On 24 June 1945 the glory of Soviet arms was demonstrated to the whole world in the first Victory parade on Red Square. The order to hold the parade was signed by the Supreme Commander-in-Chief, Armed Forces of the USSR, Josef Stalin. 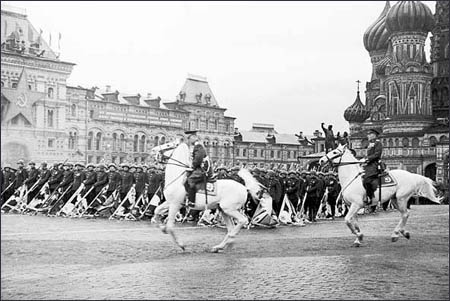 On the rainy day, 24 June, 1941 Marshals Georgy Zhukov and Konstantin Rokossovsky rode through the parade ground on white and black stallions. The fact is commemorated by the equestrian statue of Zhukov in front of the State Historical Museum, on Manege Square. The General Secretary of the Communist Party of the Soviet Union, Joseph Stalin, stood atop of Lenin's Mausoleum and watched the parade. The legend says that Stalin actually intended to lead the parade riding Zhukov's white stallion but the horse bolted in the manege because of Stalin's lack of riding skills. Even when the Soviet leader grabbed the mane, he eventually fell to the ground. After that, he just spat and said "Let Zhukov take the parade. He's an old cavalryman".

However, Victory Day celebrations were cancelled by Stalin in 1947.  This tradition was returned only in 1965 to commemorate 20th anniversary of the Great Patriotic War termination.

After the collapse of the USSR, parades were not held from 1991-1994. In 1995 on the occasion of 50th anniversary samples of military equipment were displayed at Poklonnaya Gora and columns of veterans marched on Red Square.    In Post-Soviet Russia  each parade has been unique. There have been numerous changes in terms of scale and participants. This year it will not be that grandiose as the previous one when  the 65 anniversary of the end of WWII was celebrated, however, not less spectacular. The dress rehearsal will be held on 7th May at 10 a.m.