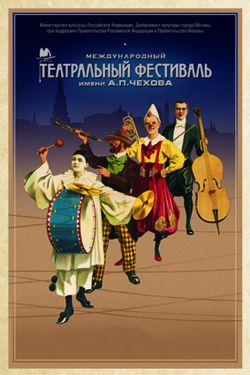 XI Chekhov International Thetre Festival
This year once again International Chekov Theatre Festival opens its doors to the theatre goers.It is run from May, 19 till July, 14 on the stages of renowned Moscow theatres and features productionsa by directors and choreographers who brought their performances earlier.Thus the new works are presented by Robert Lepage ("Playing Cards 1: the SPADES", Canada); Matthew Bourne ("The Sleeping Beauty", Great Britain); James Thiérrée ("Raoul", France); Victoria Tierre-Chaplin ("Murmures des Murs", France); Joseph Nadj ("Sho-bo-gen-zo", France); Emmanuel Demarcy-Mota ("Rhinoceros"), Lin Hwai-min ("Nine Songs", Taiwan). The cast of performers are also well-known to and much loved by Russian public: Sylvie Guillem ("6,000 Miles Away", Great Britain); Aurelia Tierre-Chaplin ("Murmures des Murs", France); Maria Pages ("Utopia", Spain).
Moreover, the Moscow and Russian theatre goers are able to see the works by directors, choreographers and troupes that have been so far little known in Russia.
If you are interested in seeing one of performances , ask your Moscow tour guide to help get tickets for you.
For the schedule of performances, please see the