Moscow is the hub of Russia's extensive rail network. It is home to 9 railway stations. All of them are close to the metro in the central part of the city. 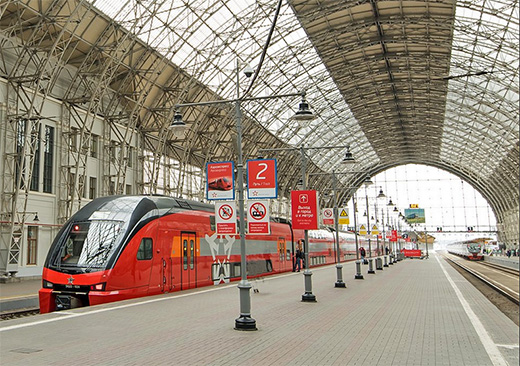 Train station in Moscow
Moscow is linked to most cities in Russia by train. You can even travel abroad to Mongolia, China, Belarus, Ukraine, Finland, France, Germany, and many other foreign countries.

As you can see three train stations (Leningradsky, Yaroslavsky, and Kazansky) are located in the same area on Komsomolsjaya square. Trraveling by train is a great way to see the country and we highly recommend you trying it during your Moscow tour. 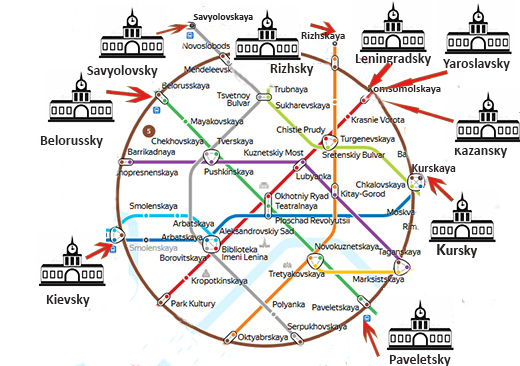 How to find your train?

1. Learn the name of your railway station

At first, you need to identify your train station. You can find its name written on your e-ticket. 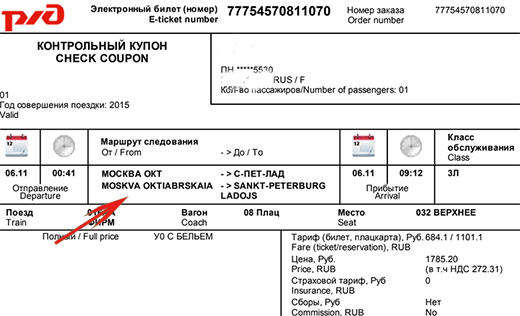 train ticket to St Petersburg
However, on this ticket, the name written is Moskva Oktybrskaya. What station does it refer to? Moskva Oktybrsjaya refers to the Leningradsky train station. Other railways stations are easier to guess.

Be careful when you plan your trip to St Petersburg. While most trains depart from the Leningradsky train station, some of Sapsan trains also leave from Kursky station.  It is always essential to check these details on your ticket!

What train do you need? If your destination is more than 200 km away from Moscow, you'll need a long-distance train.

Long-distance or suburban train?
If you travel somewhere closer, you'll most likely use a Suburban train (in Russian "electrichka"). However, there might be some exceptions. Thus you can reach Sergiev Posad (60 km from Moscow) both by a suburban train or by Lastochka long-distance train going to Nizhny Novgorod.

If you go to a Moscow airport, you'll need to find an airexpress train.

Find a timetable with details of your train. The information on long-distance trains is always in both Russian and English. The info on suburban trains might be only in Russian as these trains are usually used only by the locals.

As there might be several screens with train schedules you'll need the one with departure info. Some train stations have two separate timetables - one with details on transit trains and another one with trains departing from Moscow. 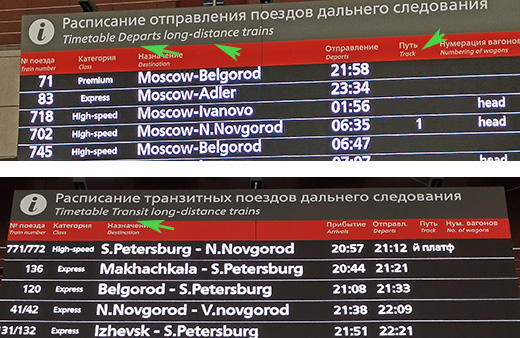 Train timetables
The timetable shows the destination of your train, time of the departure (on the left), and track number. The track info is usually announced around 45 min before the departure.


The train station for Trans-Siberian

However, if you wish to include Kazan in your Trans-Siberian journey, you would need to depart from Kazansky train station, which is on the opposite side of Komsomolskaya square.

You can reach St. Petersburg by an overnight train (the most comfortable brand train include «Red Arrow," Nevsky Express," Grand Express," «Double-deck train." The journey usually takes around 8 hours.

A faster option is a bullet train. The most commonly used is the Sapsan train. It takes only 3.45- 4 hours to reach St Petersburg. You may also go by the "Strizh" train. Unlike Sapsan, it also offers sleeping compartments, but it covers the distance in 4,5 hours.

Traveling to the towns of Golden Ring by train is usually more comfortable compared to driving. The journey from Moscow to Vladimir only takes around 2 hours compared to 4-5 hours by car.
The most common bullet trains are "Lastochka" and "Strizh." They both depart from the Kursky train station. Lastochka only has sitting carriages while Strizh has both seats and sleeping compartments depending on what category you will choose.

Some trains to Vladimir depart from the Yaroslavsky train station. These are the long-distance Trans-Siberian trains that also stop at Vladimir. These trains only have sleeping compartments. The journey will be a bit longer, roughly 2 hours 40 min.

You can reach SVO airport, DME airport, and VKO airport by aeroxpress train.