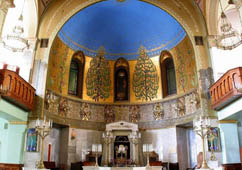 The synagogue was built close to the former Jewish settlement in Zaryadye. In 1881 Moscow authorities finally allowed the Jews to have their own synagogue. The Jewish community hired architect Semeon Eibuschitz, but ten years later when construction was nearly completed, the project was suddenly banned by the authorities. The new Moscow General-Governor, Prince Sergey Aleksandrovich, gave the Jews only two choices: sell the building or convert it into a charity building. However, after the Russian Revolution of 1905, the government was forced to proclaim freedom of religion, so Jews, Old Believers, and other minority faith groups were free 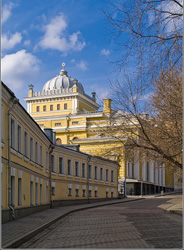 Moscow Choral Synagogue
to build their places of worship anywhere. The architect Roman Klein finished the construction and the synagogue opened in 1906.

It's a very impressive building. The façade is neoclassical and the interior is a fine example of the Moorish style that can be seen in synagogues across Eastern Europe, with Arabesque moldings and murals.

It was the only synagogue in Russia that continued to operate throughout the Soviet period. In September 1948 the synagogue solemnly welcomed the ambassador of Israel Golda Meir. In 1960-1980 the synagogue was the center of the Zionist movement.

It is an Orthodox Jewish synagogue. You are welcome to attend the services on Shabbat or visit the synagogue any other day. You can include it in a city tour with your Moscow tour guide.
Top Moscow and Russia tours