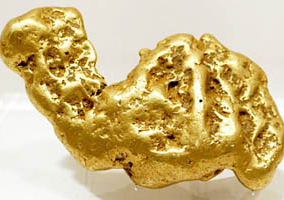 Camel nugget
The Diamond Fund of Russia is a collection of most precious items of the Russian treasury: unique diamonds, rare precious stones, masterpieces of jewelry of the 18th-20th centuries, gold and platinum nuggets.

The Diamond Fund dates back to the time of Peter I. In 1719 the Russian emperor declared the Imperial regalia to be the property of the state. Peter's gem collection was later stored in the Diamond Chamber in the Winter Palace in St Petersburg. All succeeding monarchs added their contributions to the Chamber.
The collection of regalia in the Diamond Fund consists of the Great and Small crowns, maces, scepters, the Great Chain with the cross and star of the Order of St Andrew and clasps to fasten the coronation mantle. The masterpiece of jewelry is The Great Imperial Crown. It was made in 1762 for Catherine the Great by the court jeweler J.Pauzie. He adorned the crown with five thousand diamonds making a pattern of laurel wreaths and oak branches. The crown is topped by a huge red spinel, the second largest in the world. It weighs almost 400 carats.
The historical section of the exhibition contains "Seven Wonders". These are seven world famous precious stones. One of them is the Orlov diamond. It once adorned the sculpture of deity in India. It was later found in Amsterdam where the Count Grigory Orlov bought it and presented to Catherine the Great.
The Diamond fund has the world largest collection of golden nuggets. The Big Triangle weighs 36 kilograms. It is the heaviest one in the world. Many of them have unusual shapes hence their names are: Hare's Ears, Camel, Mephistopheles.
The Diamond fund is in the same building where the Armory museum is. You can visit it after the Armory tour with your Moscow tour guide. 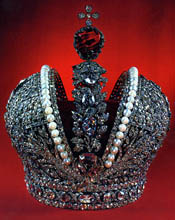