Gorky house-museum also known as the Ryabushinsky mansion is one of the finest examples of Art Noveau in Moscow. The first owner of the house Stepan Ryabushinsky was a prominent figure in the business life of the city, as well as an old-believer and a connoisseur of arts. 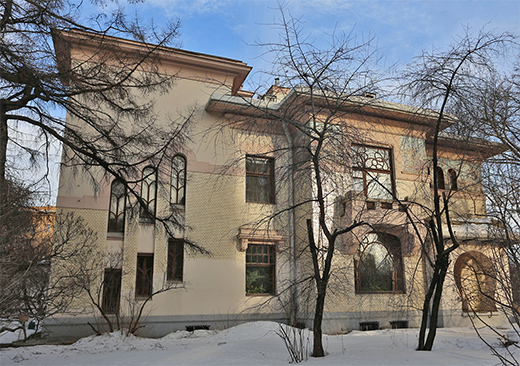 Famous for its fabulous décor the mansion was designed by one the greatest Russian architect Fedor Shekhtel who is often referred to as Russian Gaudi.

Style Modern (the Russian term for Art Nouveau) was very popular in Russia at the turn of the 20th century. Wealthy merchants and industrialists no longer wanted to live in ordinary empire-style houses. They wanted something new, something original. And so, as a result, now we have exquisite mansions like pearls, scattered around Moscow’s old center. 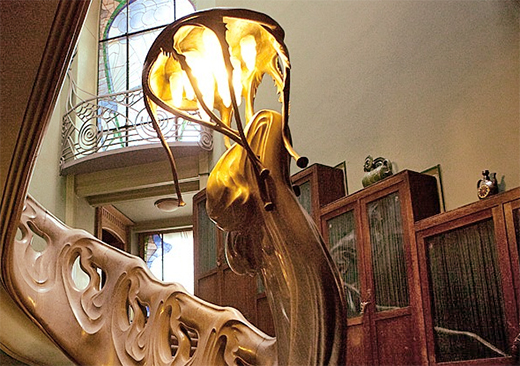 The famous staircase of the Ryabushinsky mansion
Gorky house museum is one of the accessible Art Nouveau mansions to visit, as many others are now used as embassies.

The house looks amazing both inside and outside.

There is no solemn symmetry of classicism here, as the house has more than one façade. The outside walls are adorned with a mosaic frieze depicting a garden of paradise with orchids in bloom.

Entering the hall is like diving into an underwater kingdom, with the pattern on the floor evocative of shore pebbles. The main staircase climbs up like a curving sea wave, with a fantastic jellyfish chandelier overlooking the hall below.

The rest of the house, with its glittering stained glass windows, contains many more surprises from Shekhtel’s imagination.

The interiour of the house

After the revolution, Ryabushinsky fled the country. His mansion was later given to Maxim Gorky, a prominent Soviet writer, who lived here from 1932 to 1936. 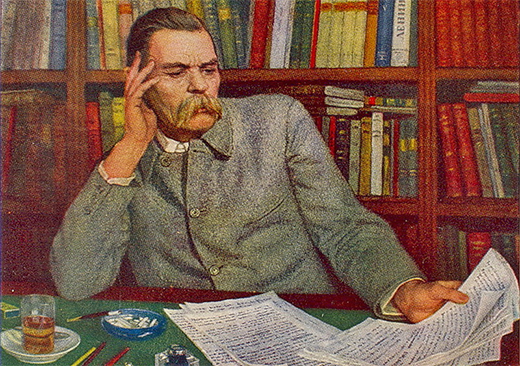 Maхim Gorky
After the Revolution Gorky spent many years in Italy partly for health reasons. It was Joseph Stalin who insisted on Gorky’s return back to the USSR. The life in Russia could seem very comfortable and happy. Gorky was offered a luxurious mansion and a dacha. He was given all possible honors. But was he truly happy?

Gorky didn’t feel comfortable in his luxury mansion. In his diaries, he described the exquisite architecture of the house as bizarre and barbarian. While visiting the museum you may learn more about Gorky life in the USSR and also find numerous preserved belongings.

The writer lived here until his death in 1936. The widow of Gorky's son continued to live in the house until her death in 1965. The museum was opened here in 1995.

The house is worth seeing for its fabulous décor. It's located in the historic center of the city and your Moscow tour guide can easily help you to find it.

The museum address is Malaya Nikitskaya street 6/2, the nearest metro stations are either Pushkinskaya/Tverskaya or Arbatskaya.

The tour of the house usually lasts about an hour. It is a must-see sight for all architecture lovers. We are happy to include it in any of your Moscow tour itineraries.