Home → Moscow highlights → Jewish museum and the center of tolerance

Jewish museum and the center of tolerance 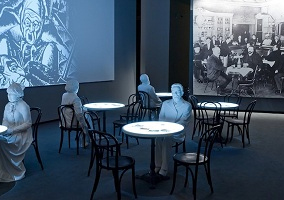 In 2012, Moscow welcomed the opening of a state-of-the-art museum dedicated to the history of Jews in Russia (including the Soviet Union and Imperial Russia). It was a major event and featured a visit by the President of Israel, Shimon Peres.

The exhibition is contained in the walls of the former Bakhmetyevsky Bus Garage, built by world-famous architects-constructivists Konstantin Melnikov and Vladimir Shukhov. The immense space is divided chronologically into several galleries in order to help us understand the life of Jewish communities in different eras: Medieval Europe; life in the Shtetl; the fate of Jews in the late 19th to the early 20th century in Imperial Russia; and life in the Soviet Union.

Unlike many museums that display their exhibits in showcases, this museum uses interactive media technologies that are memorable and thought provoking, appealing not only to adults but also to children of different age groups. Technologies range from touch-screen tables where you can participate in the toll, to a virtual Torah, or to a magic mirror where you can find yourself dressed in the clothing of a 19th century blacksmith, a trader or rabbi. 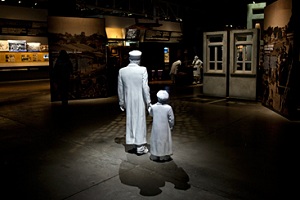 On top of all this, there is a unique 4-D circular cinema hall, where viewers can feel wind, smoke, splashing water and vibrating seats while watching a 10-minute movie called Beginning, evoking the Creation of the World.

If you have only a couple of hours to spare, you will be able to have a brief overview of the various facets of Jewish life and history. The innovative format of this museum provides an opportunity for the whole family to spend an informative and enjoyable day out.  Besides the permanent exhibition, the museum also houses a library, museum shop, research center, conference halls, children's center and a kosher café. The museum also holds temporary exhibitions and joint projects, hosts lectures etc.

Do not hesitate to ask your Moscow tour guide to give you directions.