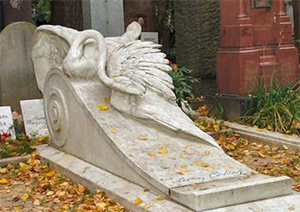 The grave of singer Leonid Sobinov
Novodevichy Cemetery can be divided into two sections: the ‘old’ one located on the convent grounds; and a ‘new’ one that adjoins the cloister. Since its very beginnings the convent has been a burial place for nuns of noble origins, as well as prominent personalities, heroes of the Napoleonic wars, historians, philosophers, and merchants. The new cemetery was laid out later and became the most prestigious place to be interred in Moscow, after the Kremlin necropolis in the Soviet era.

Strolling along the cemetery’s paths is like walking through a sculpture park, except that these sculptures are the tombstones of prominent writers, poets, artists, and composers, each grave telling a story about the person buried within.

Some of these well-known personalities were buried here by their own request, while some were reburied in Novodevichy cemetery by the order of the Soviet government. Nicolai Gogol, the famous satirical writer, and the playwright Anton Chekhov were among them. Many renowned composers and singers are also interred here, including Dmitry Shostakovich, Sergey Prokofiev, Feodor Chaliapin and others.

The cemetery became also the final resting place for numerous military and political dignitaries (and their relatives) in the Soviet era, including the First Secretary of the Communist party Nikita Khruschev, the wife of Stalin, Nadezhda Stalin-Allilueva, and the wife of the last head of USSR, Raisa Gorbachev.

One of the most notable non-communists buried at Novodevichy is Boris Yeltsin, the first elected president of democratic Russia. Just 50 feet away is the grave of Mstislav Rostropovich, the renowned cellist and conductor, who died the same week as Yeltsin. T

he gravestones of these prominent people tell riddles and stories which can be revealed by your Moscow tour guide. 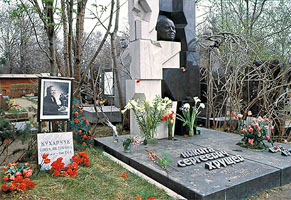 The grave of Nikita Khruschev

The grave of Galina Ulanova
Top Moscow and Russia tours