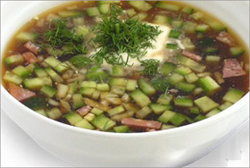 Okróshka  is a cold soup popular in  Russia in summer time.  The main ingredients include diced raw vegetables, boiled meat, eggs, and potatoes. The soup is served with kvas ( a popular Russian fermented drink made from black rye) and sour cream.

The name of the soup derives from the Russian verb "kroshitj" which means to crumble into small pieces. Most probably the origin of the soup goes back to medieval times. At that time Russians made a very simple and popular soup mixing kvas with chopped black radish and onions.

Over time the soup was enriched with other ingredients. It's often believed that 'okroshka' was invented by barge haulers who worked on rivers such as Volga. The workers were given dried fish and kvass for lunch, but as their teeth often left much to be desired, they soaked dried fish in kvas. Later, to make the dish more nourishing they started adding other vegetables - baked potatoes, radishes, cucumbers.

In a deep bowl mix chopped cucumbers, radishes, greens, boiled meat, and eggs. When the 'salad" is ready put the mixture in plates, pour cold kvas, add a bit of salt. The soup is served with sour cream.

This soup has an interesting but unusual taste but we think it might be a curious experience to try it during one of your Moscow tours such as  Moscow in three days.
Top Moscow and Russia tours