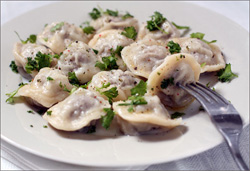 Pelmeni or meat dumplings are extremely popular in Russia, but historically this dish has eastern origin. The word "pelmeni" is derived from two words of Finno-Ugric language. Ancient men of Perm and Udmurtia called them "pelnyan" or "bread ears".

For these people, dumplings meant not only delicious meal, but also an important component of the archaic ritual. Sacrifice is a common part of pagan religious practices, and the dumplings were a symbol of sacrificed animals. Dumplings were very popular in Siberia and later in the 14th century were discovered by the Russian explorers.

Frozen meat dumplings are ideal for the cold climate. They can be perfectly preserved through the winter without losing their characteristics, and meat, hidden in the dough, does not attract wild animals.

Traditional Ural  pelmeni are stuffed with three kinds of meat - beef, lamb and pork. But you can come across lots of other meat or fish fillings. In Siberaia pelmeni are even cooked with the bear meat.

You should definitely try pelmeni during your Moscow tour. You'll find them in fancy restaurants or cheap eateries. You can also buy frozen pelmeni in shops and cook them later at home. (Keep them in a freezer).

How to cook frozen pelmeni? Drop them into salted boiled water (it should be a large amount of water). You can also add a bay leaf. Wait till they float. Cook for 2-4 min more. Pelmeni are traditionally served with butter and vinegar, sour cream or mustard.

Method:
1. Mix water with eggs and salt. Make a pile of flour with a hole in the middle, pour eggs with salt inside. Stir well until the dough is soft and stretchy. Leave the finished dough for 20-30 minutes

2. To prepare the filling you should grind beef, pork and onion, add salt,   pepper, sugar and water and mix well.

3. Divide the dough into several portions and roll them out into very thin strips. Spread beaten egg on its surface. Drop a tablespoon of minced meat on the dough strip at a distance of 5-6 cm from each other. Cut the circles out with a glass. Squeeze the edges together all the way around

4. To cook pelmeni, boil much water and salt it. Drop pelmeni into boiling water. Don't forget to stir them from time to time. Boil for 20 minutes.

Your Moscow tour guide can bring you to various places in Moscow where you can try delicious pelmeni. 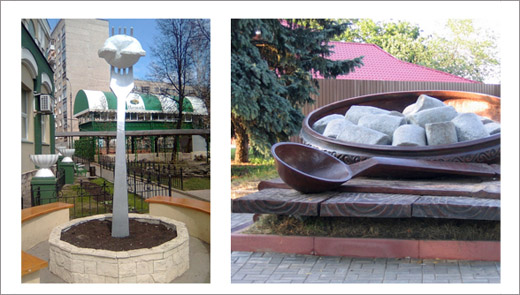 Monuments to pelmeni in Izhevsk and Poltava


Pelmeni are so popular in Russia and Ukraine, that people even  raised monuments to this popular dish. Here're monuments in Izhevsk (Udmurtia) and Poltava. They say that in the future these monuments will look more solemn with pelmeni being carved from marble. There's also a similar monument in Canada, commissioned by the Ukranian community.
Top Moscow and Russia tours