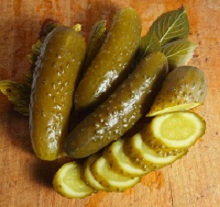 Pickled cucumbers have been known in Russian for centuries. Since it is quite commonly grown culture, a lot of recipes how to pickle cucumbers appeared.
There is a century-old tradition in Russian to eat pickles as a "chaser" after drinking vodka, another tradition -  to have them with potatoes.
While touring around Moscow with a Moscow tour guide, try one of the most famous cold appetizers in a local restaurant. If you liked them, here is a simple recipe that can help you prepare pickles on your own.
Please note there a huge variety of recipes, below is one of them.

Wash cucumbers and pour cold water, leave them for 2 hours. Thanks to that they will remain crispy. While cucumbers are in the water, we prepare spices. Shell garlic, cut into small pieces red pepper, clean horseradish root, and also cut it. Put spices at the bottom of the saucepan and the cucumbers, then spice again, and so on in layers.  Prepare the brine – 2 tablespoonfuls for a liter of water. Make as much as to cover the cucumbers in the saucepan. Put horseradish leaves on top. Pickles will be ready in 24 hours if you pour hot brine and in 3 days if you make with cold water. Bon Appétit!!!

It's nice to try home-made pickled cucumbers in villages. For instance, you might have a stop to try them on your way to Sergiev Posad which is included on our three days in Moscow tour.
Top Moscow and Russia tours