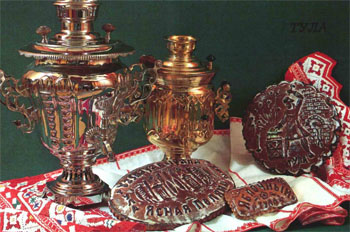 Pryanik is a sweet bread or cookie flavored with spices; it's often described as "Russian gingerbread". Pryaniki are usually filled with jam, caramel, or honey.

The name of the Russian gingerbread derives from the word 'pryany' which means 'spicy'. The first pryanik in Russia appeared around the IX century and was called "honey bread". They were based on rye flour mixed with honey and berry juice. Later when Russia started to trade with India and the Middle East and exotic spices were imported, spices such as cardamom, cinnamon, nutmeg, ginger, cumin were often added to flavor the taste.

In the XVII-XIX centuries the production of pryaniki increased, each region had its own recipe and the secrets were handed down from generation to generation. They were equally loved by the poor and the wealthy people and were cooked on various occasions. Thus, a pryanik brought by a man to a young lady could be an indication of a marriage proposal. Special pryaniks were cooked for wedding ceremonies.

Today, pryanik is served most often as a snack with tea or coffee. It is produced in numerous regions of Russia but especially popular in Tula.

Nowadays people do not often cook pryaniki but we usually buy them in shops. You'll be definitely treated with pryaniki if you choose to have a traditional tea-party during your Moscow tour especially if you stay three days in Moscow.