The Pushkin Museum of Fine Arts is the largest museum of western art in Moscow. It is a complex of four galleries. The main building displays Antiquities, Byzantine art, and European paintings up to the 19th century. The Museum of Private Collections has a diverse mix of Russian and foreign art. The Roerich Museum in a backstreet around the corner is dedicated to Roerich family of mystics, painters and explorers. The gallery of 19th and 20th century European and American art boasts a unique collection of impressionist and postimpressionist artists. This collection makes the Pushkin museum famous all over the world. 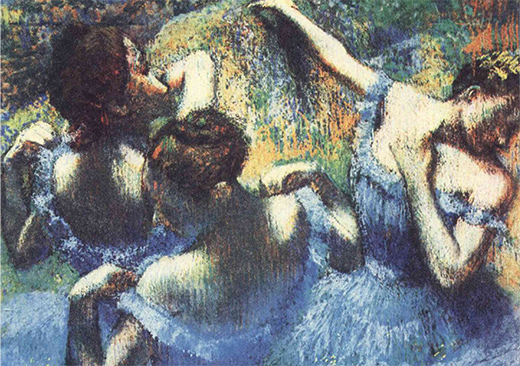 Dega. Blue Dancers
The museum’s name is misleading, as it has nothing to do with the famous Russian poet. It would be more fitting if the museum were named for its real founder, Professor Ivan Tsvetaev.  We recommend that you to visit the Gallery of 19th and 20th century European and American art. It is located on Volkonka Street to the left of the main entrance. Of particular note in the gallery are the paintings by French Impressionists, Post-Impressionists and masters of the early 20th century. Here you can see the works of Claude Monet, August Renoir, Camille Pissarro, Edgar Degas, Paul Gauguin, Vincent Van Gogh, Henri Matisse, and Pablo Picasso.

Van Gogh. Landscape at Auvers after Rain;Renoir.Porrait of Jeanne Samary; Picasso.Young Acrobat on a Ball
The Gallery is not very big. It'll take you 1-2 hours to explore the collection of 19th-20th century masters. But you'll be surprised by the quality of the paintings. Each work is a real masterpiece.
We recommend to visit this museum during your Moscow tour.
Top Moscow and Russia tours