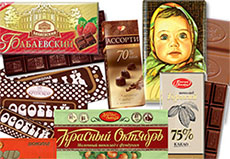 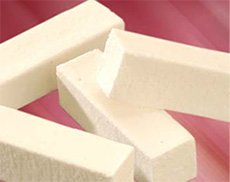 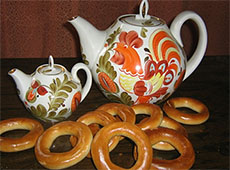 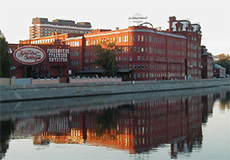 Red October factory
During your Moscow tour don't miss the chance to enjoy different sorts of confectionery, chocolate, and sweets. Firstly you should pay your attention to ring-shaped rolls called baranki and soushki, pastila and filled chocolates. Let your Moscow tour guide introduce you to the most delicious Russian sweets and pastries, you can't find in any other country.

Pastila – a treasure from the Russian oven

Moscow tour guide will certainly advise you to taste pastila - delicious confectionery, which has been known in Russia since the XVI century. Kolomna, which is considered to be one of the oldest towns of Moscow area, claims to be the home town of it. Apple source made from the special sourish sort of apples Antonovka lies at the heart of its recipe. Such ingredients as honey and berries give pastilla its sweet, rich, and slightly sour taste. Egg whites, added to the recipe, make this desert more light and tender. Sweet tooth will enjoy the museum of pastila in Kolomna, where visitors can learn about the technology of baking pastila in traditional Russian oven and buy different sorts of it.

Baranki and soushki come from the same bread family. “Baranka” is a contraction of the Russian word “obvaranok”, which means that it is firstly boiled and then dried in the oven. Soushki are smaller than baranki and a little bit harder. So when Russians deal with soushki, they deep them in tea before eating. In popular tourist places you can meet sellers with big bands of these bread products. Don't miss the chance to buy this original souvenir and share it with your friends or relatives.

When shopping during your 3 day Moscow tour you can find chocolate bars like Osennyi Vals (Autumn Waltz), Vdohnovenie (Art Passion, dedicated to the magnificent art of Russian ballet), and Alionka (the name of the girl). Milk chocolate Alionka is loved in Russia for its special creamy taste. It is distinguished by the portrait of a little girl in a national shawl. In 1964 the famous photographer Alexander Gerinas won a contest for the best theme for the chocolate wrap. The photo of his daughter Lena transformed by painter Maslov into a color illustration became the symbol of this chocolate.

Museum of Chocolate and Cocao History, Russian Gingerbread Museum, Rot Front Museum belonging to Confectionery association “Uniconf” are also places worth visiting in Moscow. You can not only try yourself as a confectioner but bring from these places hand-made sweet souvenirs. If you have questions concerning these museums or any kind of Russian sweets, ask your  Moscow tour guide.
Top Moscow and Russia tours