None of New Year festive tables can be left without Olivier salad, often referred to as "Russian salad" by foreigners. What is "Russian" about this salad then? Maybe only the "soul" or all those distinctive ingredients which might be seen today. 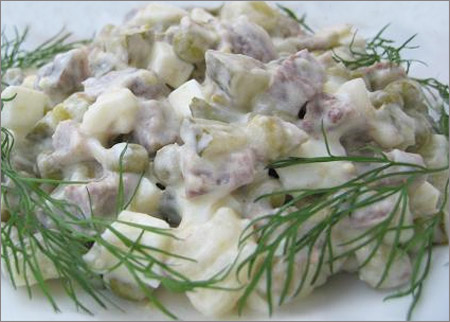 As for the origin of the recipe it belonged to Lucien  Olivier, a French chef of one of the renowned Moscow restaurants Hermitage. His signature salad became so popular in Moscow that it was even mentioned in a famous book Moscow and Muscovites by a journalist-reporter Gilyarovsky. The French chef did not intend to reveal the secret of his specialty. Nevertheless, it was known by gourmands that it consisted of grouse, veal tongue, caviar, lettuce, crayfish tails, capers, and smoked duck – all those rare ingredients at that time. It was dressed by specially-made mayonnaise of which recipe is still unknown.

Today's version of Olivier salad contains more common ingredients such as boiled potatoes, dill pickles, peas, eggs, carrots, and boiled beef/chicken or bologna. This variation, also known as Stolichny salad, became a typical dish of New Year celebrations in Soviet times and still takes one of the central plates on a New Year table. If you want to try original, more exquisite Olivier salad, then ask your Moscow tour guide for the recommendations of restaurants where it is still prepared in accordance with the old recipe.
How to cook Olivier salad?

You may try Salad Olivier in numerous canteens of Moscow as well as high-end restaurants such as Pushkin. Why not try it during your Moscow three day visit.
Top Moscow and Russia tours