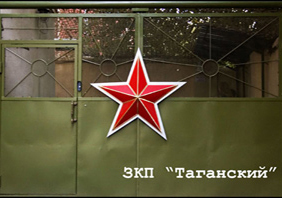 the entrance
The Tagansky Protected Command Point is one of the most unusual museums in Moscow. After taking an express elevator to a depth of 65 meters, you'll discover a whole underground city. Built during the years of the cold war, it was meant to be a communications headquarters for state leaders in case of a nuclear attack. Once a top-secret military location, it was recently opened to the public to accommodate the museum of the cold war.

The bunker was built from 1952 to 1956. Most of the residents of the Tagansky district of Moscow did not suspect that there were tunnels being dug under their blocks of flats. One would hardly notice the entrance to the formerly secret location as it was hidden in an ordinary-looking 2-story yellow building. About 2500 people comprised the staff of this military facility, with 100-600 people who worked there daily. One square meter of Bunker 42 cost as much to build as a 5-story block of flats, whereas the whole facility might have been equal in price to a small town.

In the 1960s, at a time when the world lived in expectation of atomic war, the bunker was ready to use. In the case of a nuclear attack, it might have become a shelter for 5000 people for up to six months. All necessary infrastructures for life and work were 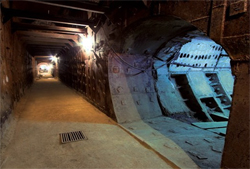 In the 1980s the threat of nuclear war began to lessen. As a result, the secret bunker lost its primary role and was abandoned. In 2006 it was put up for auction and sold for 65 million rubles. Today it's a unique museum devoted to the time of the cold war.

During the tour, you'll have a chance to watch a very interesting movie, talk on an old telephone, and try on a chemical attack suit and oxygen mask. Getting down to the bunker is like traveling back in time. Following barely lit tunnels, one could easily imagine being taken to the Moscow of the 1960s.

Now most of us have the opportunity to visit Secret Bunker 42 and experience the years of the Cold War. If you want to include Bunker 42 in your Moscow tour, then pre-booking is required.
Top Moscow and Russia tours