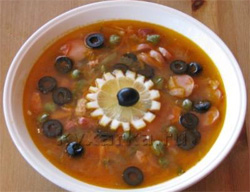 Solyanka  is a thick, piquant soup popular in Russian and Ukrainian cuisine. It can be cooked with meat, fish, or mushrooms, other ingredients include olives, pickled cucumbers with brine, cabbage, potatoes, sour cream, and dill.

Solanka was mentioned for the first time in the 15th century culinary books. The soup was especially popular among Russian peasants; it was very nourishing, served as the first and the second course.  The think soup with pickles appeared a great snack for vodka. The soup eaten together with vodka helped to drink a lot and not to get drunk. Solyanka was also often served in the morning; its second unofficial name was a "hangover" soup.  Solanka was not so popular in aristocratic society, it was considered unworthy of the noble table and loved only by the villagers. Only in the 19th century, the soup was recognized by other parts of society.

1. Cook beef in water for 1.5 hours (medium heat, covered), remove the meat, cool, and cut into small pieces.
2. Mince the onion.
3. Grate the carrots on a medium grater.
4. Cut pickled cucumbers into cubes or strips.
5. Cut deli meats into strips or cubes, fry lightly in vegetable oil.
6. Fry onions and carrots lightly.
7. Add cucumbers and cook for 2-3 minutes.
8. Add tomato paste and simmer for 5-7 minutes on medium heat.
(If the tomato sauce is too thick, add a little water)
9. Boil the meaty broth, add deli meats into the boiling broth, add meat and cook for 5-7 minutes.
10. Then add the capers.
11. Add fried onions, carrots, cucumbers.
12. Add 0.5 cups of cucumber brine or brine from the olives. Cook for another 5-7 minutes.
13. After that, add the bay leaf, pepper, and herbs.
14. If necessary, add salt. Let stand, covered for 15-20 minutes, remove the bay leaf.
Ladle into bowls, put a slice of lemon and whole or sliced olives into each plate.

Try this soup while your Moscow stay. Thus if you have three days in Moscow you may order borsch on the first day, solyanka on the second and possibly a sorrel soup on the third.