The Cathedral of the Intercession of the Virgin on the Moat is better known as the Cathedral of Saint Basil the Blessed: St Basil's Cathedral. It is the most recognizable church in Russia. 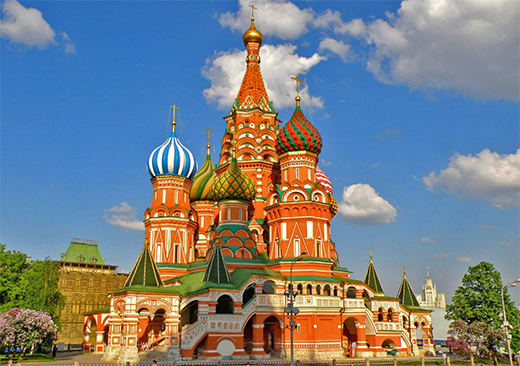 St Basil's cathedral
St Basil's Cathedral was built in the 16th century by the order of Ivan the Terrible. Since then, it has fascinated travelers coming to Moscow. Some found it bizarre; its unusual beauty entranced others.

The church is shrouded in legends and myths. People say that the cruel Russian tsar had the architect blinded to prevent him from building a more magnificent building for anyone else. Legend has it that Napoleon wanted to destroy the Cathedral when he realized he couldn't relocate it to Paris.

What makes people invent all these stories? The fairy-tale Cathedral still dominates Red Square and impresses its beauty on our imagination.


When was St. basil's Cathedral built?

The Cathedral was commissioned by Ivan the Terrible to commemorate the capture of the Khanate of Kazan.  It was constructed from 1555 to 1561.

Saint Basil's is a cluster of buildings - a central church surrounded by nine auxiliary churches, eight dedicated to Ivan's eight victories over the Tatars, and a smaller one consecrated to Saint Basil. This famous Moscow saint was buried in the grounds, and his name later became the name of the Cathedral. 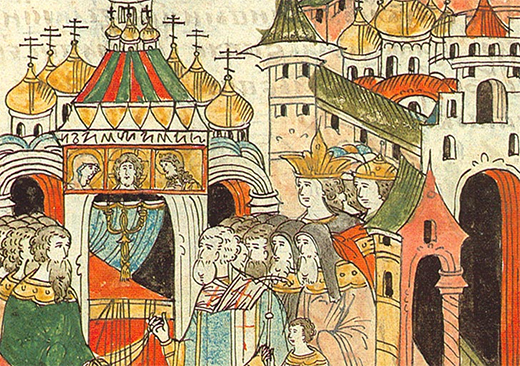 The construction of St Basil's Cathedral

According to chronicles from the time, St Basil's Cathedral was designed by two Russian architects: Barma and Postnik. Another theory suggests that Yakovlev and Barma were one person. Many serious Russian historians believe that architects were not blinded and went to construct more churches in Russia.

The third version says that the temple was erected under the guidance of an architect from Western Europe. The unusual composition of St. Basil's Cathedral and a blend of Russian and Western European elements of decoration prove that there was a distinctive influence from abroad. The last version, however, has no proof in chronicles.

St Basil's Cathedral on Red Square remains the most unusual church in Russia and has become an enigmatic symbol of Moscow itself, surviving the Revolution and Soviet times.

St Basil's Cathedral is one of the most unusual Russian churches. A visiting 19th-century French aristocrat, the Marquis de Custine, compared the cathedral to  "the scales of a golden fish, the enameled skin of a serpent, the changeful hues of the lizard, the glossy rose and azure of the pigeon's neck." He wondered whether "the men who go to worship God in this box of confectionery work." could be a Christian. 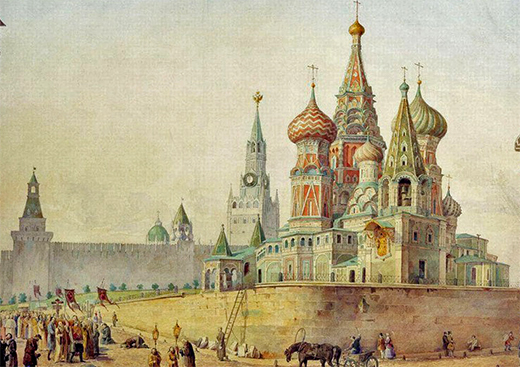 St Basil's cathedral in the early 19th century
The height of St. Basil's Cathedral is 65 meters. For a long time, until the end of the 16th century, it was the tallest building in Moscow. Nine independent temples are built on a single foundation - and are interconnected by internal vaulted passages decorated with ornaments in the form of herbs and flowers. The building is devoid of a clearly expressed facade. Whichever side you approach the cathedral - it seems that it is the main one.

The cathedral is built of bricks. In the 16th century, this material was relatively new: before, churches' traditional materials was limestone.

No matter how complex the structure of the temple may seem, it is very logical. The center of the composition is the main tent-roofed Church of the Intercession, around which there are eight other pillar-like domed churches. In plan, the cathedral forms an eight-pointed star. 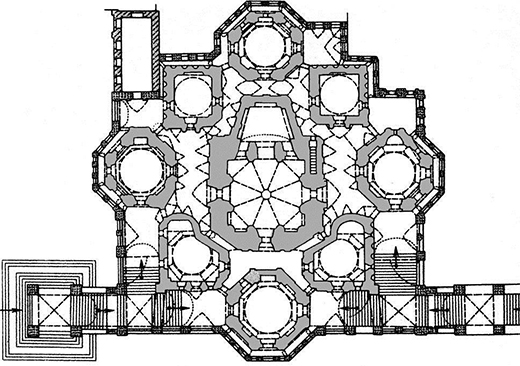 The plan of St Basil's cathedral
The eight-pointed star in Christian symbolism carries a deep meaning - it symbolizes the entire Christian church, which is a guiding star in a person's life to Heavenly Jerusalem.


The mystery of colors

The church in the 16th century looked different from today. The vivid multicolored pattern on its domes appeared only in the 17th – early 18th century. Original Cathedral was painted mostly red and white.

Numerous art historians believe that The Cathedral of St. Basil the Blessed was built as a visual representation of the Heavenly Jerusalem.  It was meant to symbolize both a town and heaven in the middle of Moscow. 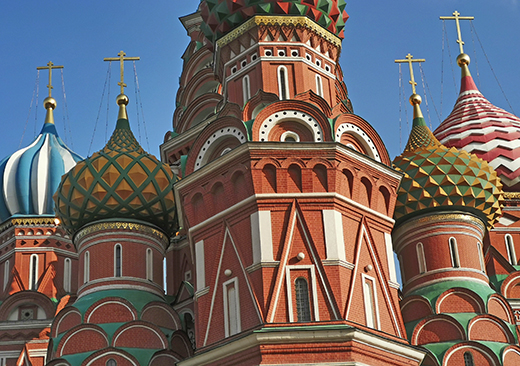 How to depict the Heavenly city? Does it need to resemble Jerusalem? Should it look like the Kremlin? The epochs changed, along with them, the people's idea of how paradise should look. The church acquired its vivid present-day colors more than 100 years after its construction. The bright pattern of the church domes makes it look like a blossoming garden of heaven.

The cathedral is not very spacious but intimate and atmospheric inside. You can follow a maze of darkened galleries from one chapel to the next, experiencing the building's medieval past.
These days the church is a museum. What are the top reasons to go inside? 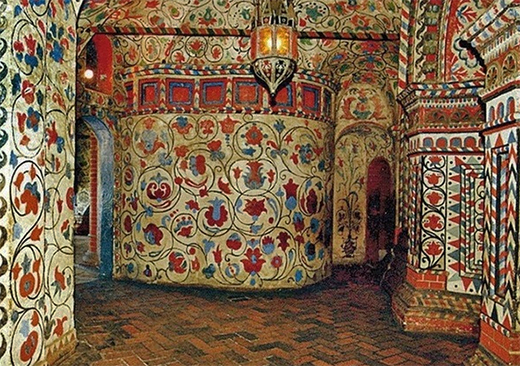 Please note that the church is not pram/wheelchair friendly. The visitors have to climb a very steep staircase to reach the second floor.

You can see St Basil's Cathedral during your tour of Red Square. If you have more time you will be able to visit the museum accompanied by your Moscow tour guide who can tell you more about its history and architecture. 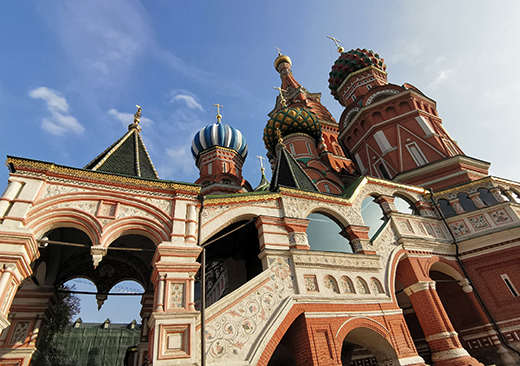