The museum of Jewish history 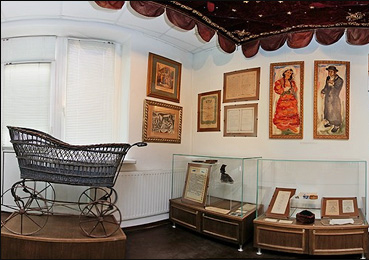 When did the first Jews come to live in Russia? We can find some evidence of Jewish presence in Russia in the chronicles of the 15th century, but there were not many until the 18th century. During the reign of Catherine the Great the situation changed dramatically. In the 1790s, the Lithuanian and Polish territories, both heavily populated by Jews, became part of the Russian empire. That was the beginning of more than 200 years of the history of Jewish life in Russia. Catherine established the Pale of Settlement, where Jews were supposed to reside.

Jews in Russia led a very isolated lifestyle, never mixing with the locals, and it helped them to preserve their cultural and religious identity. During the tour of the museum you'll be able to see lots of unique exhibits illustrating Jewish religious and daily life. For example, the display features an armchair used for the traditional circumcision ritual, Torah scrolls and cases to store them, marriage contracts and children's toys.

Rare documents, photographs and pictures tell the story of Jews in Russia from the 18th century to the present day. You'll learn about traditional Jewish professions and crafts, and about their relationship with the government before and after the Revolution. Several rooms are devoted to the life of the Jewish community in the Soviet times.

The museum was founded by Sergey Ustinov, vice-president of the Russian Jewish Congress. Unfortunately the museum doesn't have enough room to accommodate all its exhibits (only 1000 items are on display, while more than 3000 exhibits are kept in storage). Visits to the museum are free of charge, but advance booking is required.  Your Moscow guide will tell you a lot about Jewish life in Russia and will be happy to answer your questions.
Top Moscow and Russia tours