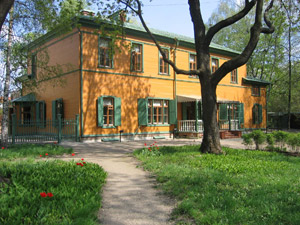 Tolstoy house-museum in Khamovniki
There is a small corner of rural charm in the center of Moscow. Tolstoy’s House Museum feels as if it still contains his spirit.

The wooden house, with some land and outbuildings, tells us a story about the life of Tolstoy's family. In 1882, Leo Tolstoy yielded to his wife's repeated requests to move from his ancestral estate at Yasnaya Polyana into a Moscow house. Sofia, his devoted wife, assured him that their children would be able to get a better education in the capital and so it was here that the large family spent all their winters till 1901.

It was in those years that Leo Tolstoy's life principles were transformed. A lover of women and drinking bouts, he turned into a person of strict moral rules based on Christian Humanism. He adhered to a formula of “four relays”, which was a way of switching activities in order to train all four of man's abilities. The first "relay" was devoted to physical labor, the second to mental labor, the third to handicrafts, and the fourth to communication with people. Leo Tolstoy devoted himself to these rules. He got up early, chopped wood and carried water from the well. His handicraft passion was making leather boots – and you can see two pairs that he made at the museum. 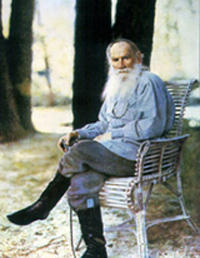 Leo Tolstoy
The dumbbells and a bicycle are the evidence of his interest in keeping fit. Amazingly, he cycled for the first time when aged 67. He was a man of a good physical health, and this allowed him to work hard. While he was writing, silence fell in the house. Nobody dared to make noise while Leo Tolstoy was writing. His great works - including "War and Peace", "Anna Karenina", and "Resurrection" - were much appreciated by his contemporaries both in Russia and around the world. Among the admirers of his talent were such renowned personalities as Flaubert, Virginia Woolf, James Joyce, and Thomas Mann. All of them paid him lofty tributes.

His welcoming Moscow house received no less distinguished friends. They included the young Sergei Rachmaninov who played the piano and once accompanied Shalyapin’s singing; the artist Ilya Repin whose portrait of Tatyana, Tolstoy's daughter, hangs in the "corner room"; his friend-artist N.N. Ge whose bust of Tolstoy stands in the living room; and the writer Maxim Gorky with whom he used to play chess.

The doors of Leo Tolstoy house-museum are also open daily from 10am to 6pm. Our Moscow tour guide is at your service.
Top Moscow and Russia tours