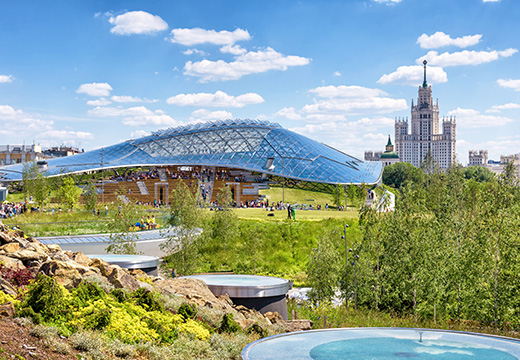 Zaryadye Park
Zaryadye Park opened its doors to the public only in 2017, but soon it became one of the favorite places for locals and tourists.

It is located in a historical district Zaryadye established in the 12th or 13th century between Varvarka Street and Moskva River. Street vendors and merchants inhabited this part of Moscow in former times, which explains the name of this area -  "the place behind the market rows" adjacent to the Red Square.

The historic district was demolished in the 1930s for the construction of the Stalin skyscraper, the Eight Sister, but after the death of Stalin the project was frozen for almost 20 years. In 1967 the Rossiya Hotel was built on its foundation. The unusual building stood there for only about 40 years and was demolished in 2006, giving way to the park zone construction.

Zaryadye Park is truly unique by reconstructions of different landscapes of Russia. The designers did not limit themselves to one climate zone and recreated four of them in Zaryadye! In different parts of the park you can find mixed forest, steppe, wetland and even tundra in miniature.

However, the special feature of Zaryadye is the floating bridge over the Moscow River that offers incredible views of the Kremlin, historical buildings and the urban skyline of Moscow. The perfect place to take beautiful pictures!

Zaryadye is not just a park, but also a cultural and educational center. The guests of the Park will be surprised at a large amphitheater under the unusual translucent structure, containing a unique botanical collection of plants. And unique media complexes in the Park "Time machine" and "Soaring" will allow you to take a virtual tour to the important historical events in the life of the capital and to fly over the main sights of Moscow and the whole Russia. 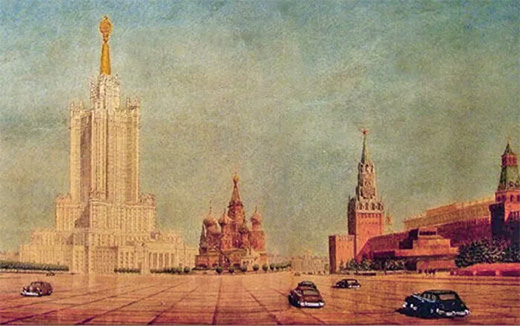 Ultimately, Zaryadye is interesting by its old churches of the 16-18th centuries that run along one of the oldest streets of Moscow, Varvarka. This medieval street strikes the imagination of any passerby with the beauty and elegance of its churches.