Monomakh's Cap
The Armoury Chamber is a unique treasury-museum displaying the wealth accumulated by Russian rulers from the 12th century until the October Revolution of 1917. Walking through the exhibition halls is a journey through the centuries. The life of the Russian monarchs is reflected in the precious items on display, each exhibit revealing aspects of its owner’s character as well as their status. The cradle of Alexander I is studded with many diamonds, while Ivan the Terrible’s eldest son, Ivan, had a measuring icon decorated with his patron saint: just two of the outstanding items on display.

The life of the monarch was closely linked with religious ceremonies. Icons in lavishly decorated frames, gem-adorned covers for gospels, Holy Communion sets made of precious metals, and pearl-embroidered vestments for high clergy were all essential to the monarchy. 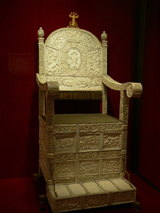 The ivory-palted throne of Ivan the Terrible
by the patriarch (the head of the Russian Orthodox Church) in order to ascend to the throne. Until the early 18th century, this ceremony involved the Monomakh’s Cap, as well as scepters, orbs, and ceremonial chains, all of which can be seen in the museum. A selection of real thrones, including the ivory-plated throne of Ivan the Terrible, the diamond throne of Tsar Alexis (decorated with over 900 diamonds), and the double silver throne of half-brothers Ivan and young Peter (later Peter the Great) are also part of the exhibition.

Peter the Great is a dominating force in Russian history. Military and civil orders, new items of tableware (tea and coffee sets), and even men and women’s fashions were taken from Europe because of his influence. Even the coronation dress of Catherine I, Peter's wife, was subject to these innovations - short sleeves, a low-cut neckline, a narrowed waist, a wide bell-shaped skirt – all of which were taken from European fashion. The entire collection of the coronation outfits of Russian Empresses is shown here, including the 47cm waist-span wedding dress of Catherine the Great. 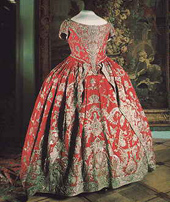 
You will be amazed by the large collection of royal carriages decorated with paintings, adorned with gems, upholstered with precious fabrics. Horses harnessed to these carriages would also be tacked up with items made of gold and silver and encrusted with precious stones. Most of these items were made in the Kremlin workshops, the leading producer being the Armoury. It produced arms and armor both for ceremonial needs and military ones and later gave its name to the whole museum. 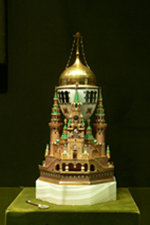 Faberge Easter egg
As well as these items of ancient state regalia, the museum has also collected various items made in the Kremlin workshops and used as ambassadorial gifts. Among the most famous gifts in the Armoury are the Faberge Easter Eggs. They were Easter presents from the last two emperors of Russia, Alexander III, and Nikolas II, to their wives. Each egg had a surprise - either a music box, a clock with a revolving face, or an egg with a model of a Trans-Siberian train.

Those interested in the secrets of the Faberge Easter Eggs or any of the other treasures should definitely visit the Armoury Chamber.  Please take into account that at the high season tickets can be sold out. It is better to buy them in advance or to book a Kremlin guided tour with our Moscow tour guide.

Armoury museum visit might appear a highlight of your Moscow tour so we highly recommend including it in our main programs (Moscow in 1 day, Moscow in 2-3 days, Moscow in 4-5 days).