Willing to get a Faberge egg? The cost of such a lovely souvenir can be around 10-20 millions USD.  Does it sound a bit pricey? You might go for a much cheaper option and get a replica.

While in Moscow  you can find jewelry eggs made on Fabergé motives and in Fabergé style. Such Easter egg will cost you around 150-200 USD.  The stylized Faberge eggs of good quality are sold in the Armoury museum gift-shop and on Kuznetsky most street,  as well as in  numerous souvenir shops on Arbat street.


What is the story behind Faberge eggs? During your Moscow tour we advise you to visit the Kremlin Armoury. Among other exhibits devoted to different periods of Russian history so-called “Imperial Fabergé  Eggs” are of great interest. These gem-incrusted items made of precious metals are associated with luxury of the pre-revolutionary Russia. Your Moscow tour guide would be happy to share some interesting facts about this jewelery brand, highly appreciated by collectors all over the world.

The first jeweled Fabergé  egg (in Russian “yaytso faberzhe”), made by Karl Fabergé  and his company appeared at the end of the XIX century. It was crafted for the Empress Maria Fedorovna, the wife of Alexander III, as a present for Easter. The idea of a jeweled egg wasn't actually new. It was inspired by the similar object that belonged to the Danish aunt of the Empress. The Hen Egg was made of gold. It had a thin white enameled shell under which a golden yolk was hidden. The latter opened and  revealed a little gold hen with multicolored feathers. The hen, in its turn, contained a miniature diamond crown with a pendant ruby. As far as this present had a great success, Karl Fabergé  was soon appointed to  be an Imperial jeweler. Each year he received special orders from the members of the Royal Family. There were only two conditions that limited Fabergé's imagination - a form of an egg and a new surprise with Royal symbols. 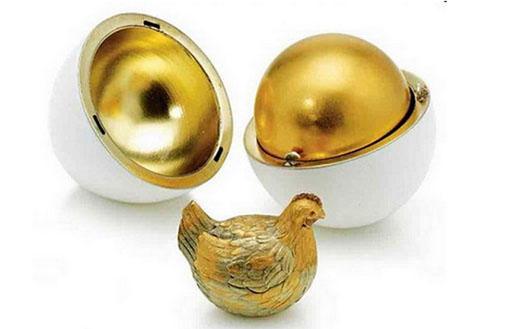 Karl Fabergé's company created about 50 eggs between 1885 and 1917. One of the most talented jewelers who made the most precious items for this brand was Michael Perchin. This master with delicate taste and great imagination made a lot of masterpieces devoted to the most important events of the Russian state history. One of the most popular works of him was the Imperial Coronation Egg, which was crafted for the anniversary of the coronation of the last Emperor of Russia Nicholas II. It contained a replica of coronation carriage of the Empress Alexandra Fedorovna. Among famous works by Perchin is the Trans-Siberian Railway Egg. It was a miniature of the first Siberian train – a steam platinum locomotive with a diamond headlight, ruby lantern and five golden carriages with windows made of rock crystal. While visiting Moscow Armory you will be able to see not only this item, but also such Perchin's works as Bouquet of Lilies Clock, Memory of Azov as well as Fabergé Eggs crafted by other famous masters. 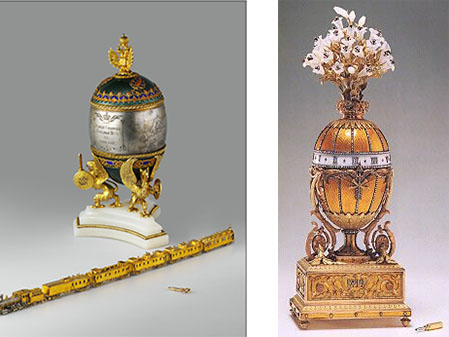 The followers of Karl Faberge

After the revolution Fabergé craftsmen left Russia and the brand changed hands several times. Only 43 items made by these masters survived. Now, this trademark belongs to Fabergé  Limited. It continues the traditions of Karl Fabergé and produces egg-themed ear-rings, pendants, cufflinks, and other accessories inspired by the Imperial Eggs. If you want to buy such sort of jewelry or visit the Kremlin Armoury and learn more about Fabergé  Eggs, your Moscow tour guide will be pleased to help you. Armory tour can be added to your Moscow in 3 days itinerary.
Top Moscow and Russia tours