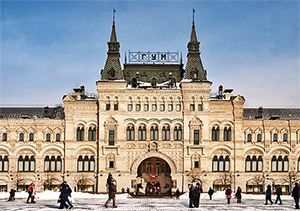 Everyone who once visited Red Square saw the long building that marks the boundary of Red Square on the East, and creates a unique architectural image together with the Kremlin and the Historical Museum. It is GUM, the abbreviation for the State Department Store.

Historically the square next to the Kremlin wall has been alive with the hustle and bustle of street vendors since the 15th century, known as a Great Mart. Later on - because of raging fires - these trading stalls were moved eastward, forming a special trading quarter. The buildings were slowly replaced but the function of this area remained. As a result, a unique construction appeared on Red Square in the late 19th century. Designed by the architect A. Pomerantsev, the upper trading rows were built, with three long arcades connected by a glass roof. The entire area was divided between the traders, however no longer as shops, but instead as salons. To attract more customers, the trading mall offered additional services. Thus a branch of the International Moscow Bank, engraving and jewelry ateliers, a hairdressing salon, a dental health surgery, a post office, and a restaurant were opened.

The stalls became the prototype of the modern European trading centers, where people not only trade, but also organized exhibitions and concerts. People came to the upper trading stalls not only for shopping. They walked there, spent time window-shopping, rested, and had fun.

Everything changed after the October revolution in 1917. The upper trading rows 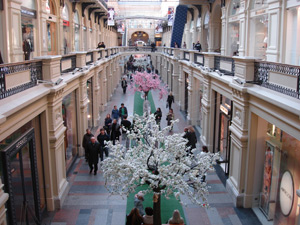 GUM's interior
were nationalized and continued to work as a department store until Joseph Stalin turned it into office space. After reopening as a department store in 1953, GUM became one of the few stores in the Soviet Union that was not plagued by shortages of consumer goods, and the queues to purchase anything were long, often extending all across Red Square. It was also a favorite spot of meeting: "At the fountain!" was the saying.

GUM is still open today, and is a popular tourist destination for those visiting Moscow with a travel guide or on their own. Many of the stores feature high-fashion brand names familiar in the west; locals refer to these as the "exhibitions of prices", bearing in mind that no one could afford to actually buy any of the items on display. However, there is still something that almost anyone can afford. Ice-creams or a meal in a Soviet-style canteen (Stolovaya № 57) and in a café "Festivalnoe" are at reasonable prices.
Top Moscow and Russia tours