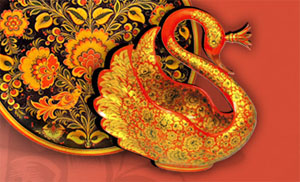 Khokhloma is a traditional Russian craft that originated in the 17th century in the area of Nizhniy Novgorod. It's the style of painting on wooden tableware and furniture. Khokhloma style can be recognized for its red and gold flower pattern on a dark background.

The most popular themes of paintings are flowers, strawberries, branches of mountain ash, sometimes birds, fish, and animals. The beautiful pieces of tableware give you an impression of being painted with gold, but Kokhloma masters had an interesting secret of 'gilding'.Dishes were rubbed with tin powder, coated with linseed oil, and heated in an oven. As a result of heat, the linseed oil turned yellow, and the tin started to shine like gold. Most probably Khokhloma craft was invented by icon masters, as the technique of painting is quite similar

Some historians believe that this handicraft was started by Old Believers,  a group of people who didn't accept church reforms of the 17th century and were severely persecuted by the officials.

Many of them fled from big cities and took refuge in the woods of  Nizhny Novgorod. Many of old believers new the secrets of icon painting who taught local craftsmen this painting technology.

The Khokhloma handcraft was fading away in the early 20th century, but it revived during the Soviet times. The main centers of production are Khokhloma Painter factory near the Khokhloma village and Khokhloma Painting enterprise in a town of Semyonov.

During your Moscow tour you can see Khohloma crafts in the Izmailovo souvenir market or in some other gifts shops in the city. You may also get such a gift in Sergiev Posad which is included in our 3-day tour of Moscow.
Top Moscow and Russia tours