The Cathedral Mosque is a spectacular building and the center of Islamic culture in Moscow.
The mosque can host over 10,000 worshipers at one time and is one of the largest mosques in Europe. It looks majestic both inside and outside!

Moscow Cathedral Mosque was raised in 2015 to replace an older mosque that was built in 1904. However, it was not the oldest mosque in the city. 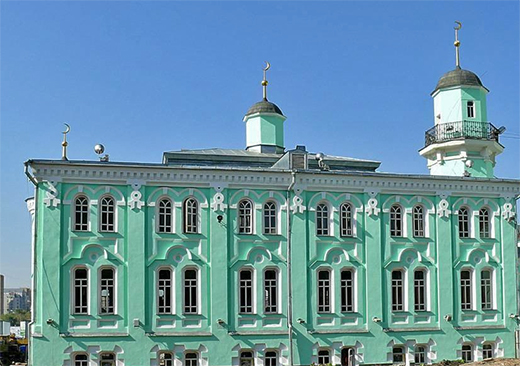 The first Muslims settled in Moscow in the 15th-16th century.  They were the Tatars who originated from the Mongol Empire. Several centuries of wars against the Golden Horde, in the end, resulted in a more peaceful integration of Islamic culture into Russian life. At that time the Muslim community settled in the Tatar quarter in the Zamoskvorechie District. (Today it is the area between Novokuznetskaya and Paveletskaya metro stations)

The first mosque in Moscow was built in the late 18th century at the time of Empress Catherine the Great. Catherine II was the first Russian ruler, who was tolerant of the religious and cultural identity of the large Muslim population of Russia.   As a result, all restrictions on mosque construction were lifted. However, the oldest mosque in Zamoskvorechie district did not survive to our days.

The Moscow Cathedral Mosque was the only mosque that functioned during Soviet times. However, in 2005 the city authorities decided to renovate it. After the reconstruction, the mosque has grown 20 times! Its area is 18.9 thousand square meters, the building can accommodate more than 10 thousand people.


The architecture and interior of the mosque

Moscow Cathedral Mosque was built to symbolize the friendship between the Russian and Tatar peoples. The two tallest minarets are similar to the Spassky Tower of the Moscow Kremlin and the leaning tower of the Kazan Kremlin. 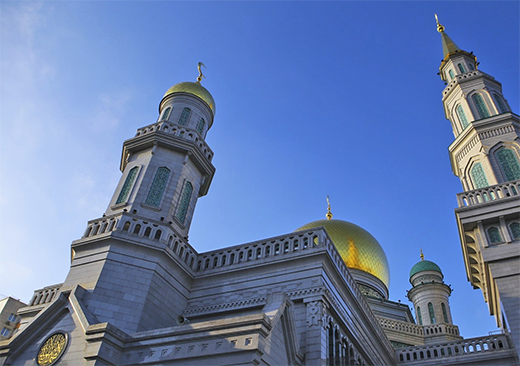 The mosque is crowned with a golden dome which makes it blend with the Orthodox Moscow skyline.

The walls of the old mosque are integrated into the new complex - they were dismantled and reassembled from modern materials, retaining the same appearance as in 1904. 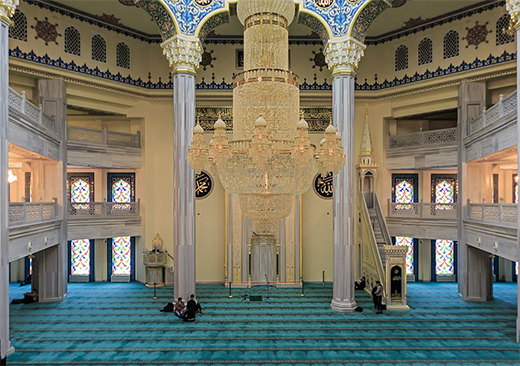 While exploring the mosque you’ll be amazed by its luxurious interiors, the striking combination of pure white marble with emerald, green, blue, and golden patterns, skillful stone and wood carving. 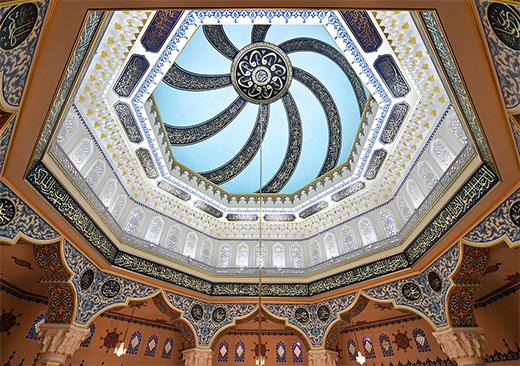 Turkey donated a lot to the mosque, including carved front doors and a crystal chandelier for the main hall - it weighs one and a half tons, and 50 Turkish craftsmen assembled it for three months. 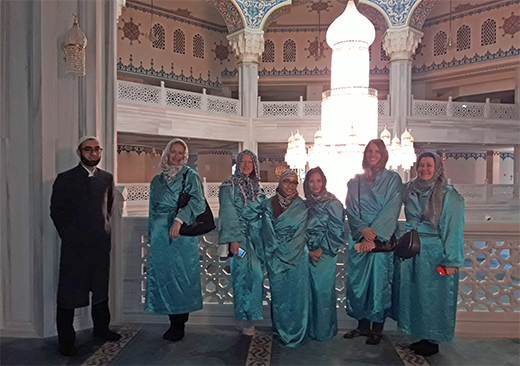 From the outside, the walls of the temple are finished with Canadian gray marble, which withstands temperature extremes well. Tall and narrow lancet windows are covered with panels with geometric ornaments of the same blue color - the color of the old Cathedral Mosque.

The museum of Islam

The Museum of Islam in the Moscow Cathedral Mosque of Moscow is located on the third floor and is free to visit. Here you can see the oldest manuscripts of the Koran. You will find examples of Arabic calligraphy, dating from the 8th century with the advent of Kufic writing. The kufi style gives the writing the effect of being carved in stone or inlaid with mosaics. Quran manuscripts are works of art. Calligraphy differed depending on the region. Artists began to use not only ink but also colored paints and gold. 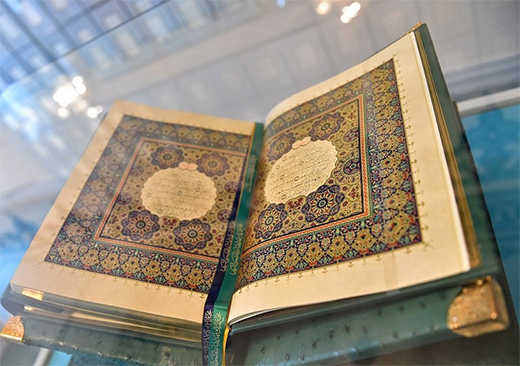 In addition to the manuscripts, the museum contains a 19th-century box from India for storing the Koran, a mother-of-pearl box in the shape of the Jerusalem mosque Dome of the Rock, a fragment of the Kaaba cover, and facsimiles of ancient manuscripts from Tashkent and Istanbul.

The museum also has the hair of Mohammed, donated by the Chechen Republic, as well as the "Silver Koran". "Silver Quran" is a copy of the 8th-century manuscript "Usman's Quran", made of silver 999 at the Moscow Mint. The original is located in St. Petersburg.