"Oh Arbat, oh my Arbat! You are my religion," Bulat Okudzhava. 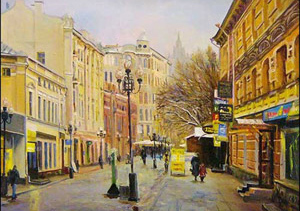 Old Arbat street
This line from the song was written by Bulat Okudzhava, Soviet-era folk singer, bard, and poet. For him Arbat street became the center of the universe, the heart of Russia, the homeland. What attracted him in this street?

The Arbat is one of the oldest surviving streets in Moscow. In the year 1493 the whole city was engulfed in a terrible fire caused by a candle in the Church of St. Nicholas in Peski which is situated on Arbat. However, the first mention does not clarify the origin of the street name. According to one of the versions the word Arbat derives from the Arabic word "arbad" meaning "suburb". At that time the city center was within the Kremlin walls and the surrounding areas were regarded as suburbs.

Arbat district changed over the centuries. Originally populated with craftsmen and merchants it became the favorite site of aristocracy in the late 18 century. The most famous noble families settled here. One of such noble mansions was rented by Alexander Pushkin after his marriage to Natalie. The Moscow high life was beyond his means. This couple had to move into the countryside leaving behind spectacular balls and luxurious assemblies.

The 20th century made its own alterations: the wheels' rumble of electric trams, first Metro station on Arbatskaya square, communal flats in the apartments to let, the construction of New Arbat street. Nowadays Old Arbat street as we call it to differentiate from the "young sister" is a picturesque pedestrian street. It is alive with street musicians who play music of different genres; with informal movements like Hare Krishna devotees; with artists who are eager to draw your portrait or caricature; with second-hand booksellers whose rows can not be passed unnoticed. Numerous cafes and various restaurants offer the menus to fit any taste and any pocket while souvenir's shops is a good place to buy a fridge magnet (prices are more expensive than in Izmaylovo Market). It is a nice venue to have a walk either with your Moscow tour guide or on your own.