This very picturesque city which seats on the banks of the Tom river was founded in early 17th century by Cossacks sent  by the tsar Boris Godunov. Ever since it grew and developed and became the educational center of Siberia. Nowadays it can boast of 6  institutions of higher education  which prepare  students for scientific  and medical activity as well as defense, nuclear, oil, chemical and machine-building industries.
The city has a versatile history. Being the place of exile in late 19th century, it became the center of White Movement after October Revolution 1917. On the days of World War II it was the home of relocated plants and factories while during the Cold War years it became the closed city where foreigners could not come due to the construction of a Nuclear Plant.
Nowadays the city welcomes foreign visitors as well as exchange students.
It will definitely impress you with its intricately designed window frames of wooden houses also known as “wooden lace”, picturesque views from some of the viewpoints and unusual sculptures.
One of the gems of this city is the homey one-man puppet theatre housed in a quaint logged cabin. You do not need to speak Russian to appreciate this experience.
Bypassed by the Trans-Siberian railway, Tomsk still attracts a lot of tourists and it is a great side trip in your Trans-Siberian journey.


Highlights of Tomsk (Half Day) 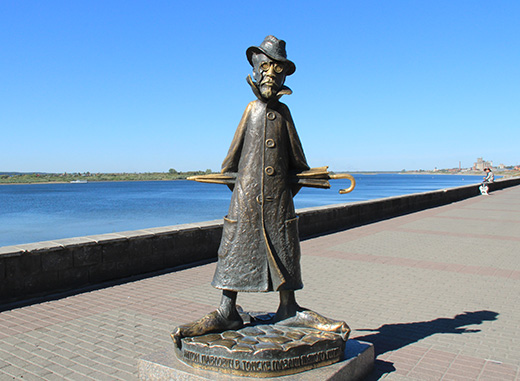 book
Charming town of Tomsk has a lot to offer to a Trans-Siberian traveller who would like to spend a relaxed day.read more
Top Moscow and Russia tours