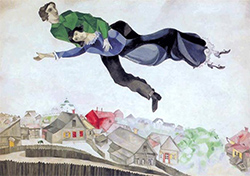 Marc Shagall. Above the city
The new building of the Tretyakov gallery houses a collection of the Russian 20th century art: avant-garde, socialist realism, and modern art. A branch of the State Tretyakov Gallery, here you can see paintings by world-famous artists such as Kazimir Malevich, Wassily Kandinsky, and Marc Chagall.

Between 1910-1920, Russian art suddenly attracted the attention of the whole of Europe. Avant-garde Russian paintings looked original, bright and different from what was seen in the west. The ideas of the Revolution inspired many talented people: poets, architects, and artists. Russian futurists, supremacists and constructivists believed in the great future of the country, and felt the thrill of creating new art. The Russian avant-garde reached its creative and popular height in the period between the Russian Revolution of 1917 and 1932.

In 1932 Socialist realism was declared to be the new state policy. The avant-garde was rejected as it was too 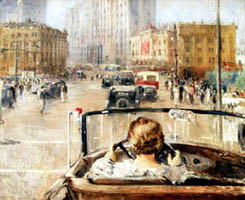 Yury Pimenov. New Moscow
difficult for the proletariat to understand and thus could not be used by state propaganda. Soviet art was meant to depict ‘the real’ Soviet life. The paintings of that time depict the happy life of the country: collective farm girls look excited working on the fields; workers are never tired; the people are confident in the future.

The gallery displays not only official Soviet art. Khrushchev’s reforms liberated people’s minds. Young artists felt the freedom to express themselves, to experiment and many underground art communities appeared in the 1960s-1980s. This movement was known as Soviet Nonconformist Art.

The paintings of the 20th century reflect the turbulent atmosphere of our history. Don't miss the opportunity to visit the Tretyakov Gallery on Krymsky Val. Your Moscow tour guide will show you a lot of masterpieces of the Soviet and Modern Russian art.
Top Moscow and Russia tours