Tverskaya is the main thoroughfare of Moscow. It bears the name of the ancient town Tver to which this road original led. When St. Petersburg was founded this road linked these two major cities of Russia. It was also known as the tsar's road, as all Russian monarchs were driven along Tverskaya on their way to their coronation, which took place in the Assumption Cathedral in the Moscow Kremlin. 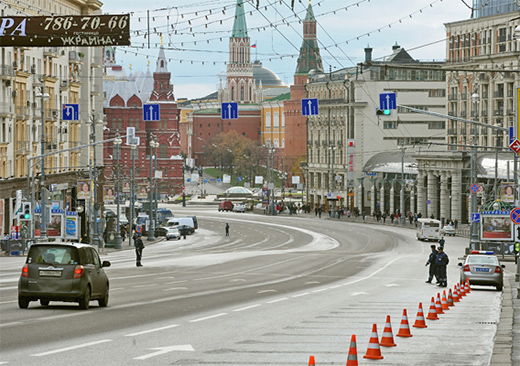 Tverskaya street
Towards the end of the 19th century, the street was reconstructed. The eclectic edifice of the National Hotel, with its interior decorated in the Russian Art Nouveau style, was built at the beginning of the street. Another landmark building became the Elyseevsky grocery store, which today still stuns with its unique interior décor and an abundance of delicacies.
In the Soviet era, Tverskaya Street was renamed after Maxim Gorky, a favorite writer of the Soviet people and the Soviet government. It seems that the street was renamed while Maxim Gorky was still alive as a gesture of appreciation for his support for Stalin's totalitarian regime. The street was also widened and turned into an avenue, however this reconstruction also buried the reminders of the époque of ‘tsarism’ together with some valuable old houses. The most precious buildings - from the Soviet viewpoint - were preserved, including Moscow Town Hall, which was moved further back from the road and put on a new foundation. Nowadays it is the Mayor's office.

Immediately in front of the local authority buildings there is an equestrian statue of Moscow's founder, Yury Dolgoruki. It is interesting that the current Mayor of our capital, Yury Luzhkov, bears the same name as the city’s founder, thus being symbolically the successor of his initiatives.

Mayor's office
Tverskaya Street is like 5th Avenue in New York, or Oxford Street in London. It is the city’s main shopping street, full of upscale boutiques and famous retailers. There are numerous cafes and restaurants, which vary from McDonald's to the upmarket restaurant Pushkin.
A walk down Tverskaya Street gives you a glimpse into the history of Moscow. Explore its courtyards and buildings with your Moscow tour guide.
Top Moscow and Russia tours