Varenyky are stuffed dumpling coming from the Ukrainian cuisine, but they're also very popular in Russia. They are made of unleavened dough and stuffed with various savory or sweet fillings. The word "varenyky" literally means "boiled thing" as dumplings are cooked in boiling water. 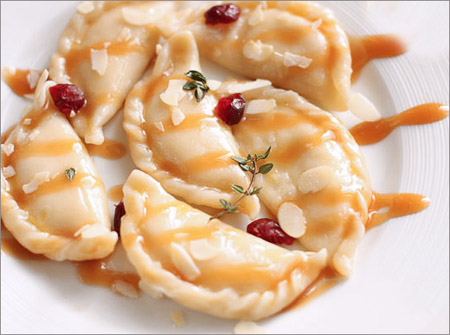 In old times vareniki were a popular meal in peasants' families.  They were not eaten every day, but mostly on Sundays or at weddings, christening or other important holidays. There was a tradition of bringing vareniki as a gift to the mother of a newly-born child.  The friends of a happy mother would say "Be always full like a dumpling", thus varenik would symbolize the continuation of the species.

Among the most popular fillings are potatoes, mushrooms, cottage cheese, fish, meat or cherries, plump, strawberries. You can try vareniki in numerous Russian or Ukrainian restaurants or find them frozen in shops. It's very easy to cook them. You'll need to drop them in boiled water, wait till they float, and cook for 2-3 min more. Vareniki are usually served with sour crème, sweet vareniki may also be topped with sweet fruit sauce.

A popular place to try dumplings in Moscow is a Ukrainian restaurant Taras Bulba. One of the restaurants is right next to the Kremlin and your guide can bring you to this place during your three-day Moscow tour.