The main collection of the Museum is located in the basement, while temporary exhibitions occupy two upper stories.

Museum organizers have worked hard to surprise the most experienced audience. A large wall facing the entrance is used as a screen for monumental installation by Jean-Christophe Coue. The paintings from the museum's collection are created by invisible brush in front of the amazed public.

Visitors of the museum will see five masterpieces sounded by the modern composer Dmitri Kourliandski whose opera Nosferatu recently suprised the theater world. Among these paintings are 'Window' by Valentin Serov, skating rink “Dinamo” by Pyotr Konchalovsky, 'Wet playbills' by Jury Pimenov, “Rostov Kremlin Gates” by Konstantin Yuon and 'Venice' by Boris Kustodiev.

It should be mentioned that the term 'Russian impressionism' in this museum is understood in its wider sense. Its collection is not limited to the masterpieces painted at the beginning of the XX century but also features artists who worked in the similar style. 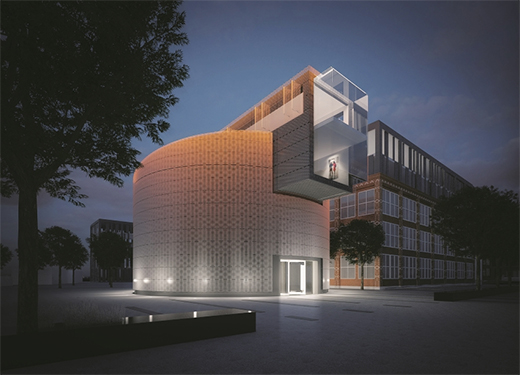 The museum occupies the former flour storage building. The reconstruction was carried out by
'John McAslan + Partners'  British architecture office who turned the museum into spaceship-like silver cylinder. The museum will surprise you with high-tech innovations including a giant cargo elevator, automatic cloakroom, modern cinema and a big balcony opening a great view.

You can learn more about the museum on its  Your Moscow tour guide will be happy to accompany you to the museum.