Home → Moscow events → Moscow is behind us 1941. The military-historical festival

Moscow is behind us 1941. The military-historical festival


13.10.2018 – 14.10.2018
Did you know that Borodino Field was not only the location of the Battle of Borodino during Napoleoinic Wars but also  the place of a severe clash between the Soviet and German forces in 1941? Join the festival of military reconstruction where the  events of the WW II will come to life.

October 13 -14 Borodino Field museum hosts  one of the largest and brightest reconstructions dedicated to the events of the Great Patriotic War. The festival is dedicated to the 77th anniversary of the Battle of Moscow. You will have a unique opportunity to witness an accurately reconstructed episode of fierce battles on the Borodino field in October 1941, where the Red Army soldiers met with the Nazi

Over 500 participants of military-historical clubs of Russia will take part in military reconstruction. You will see the armored vehicles of the beginning of World War II: armored vehicles T-1, BTR-222, BTR-321, motorcycles, KRUP tractor, PAK-36, artillery guns, firearms as well as  military aviation from the times of the war. Apart from the battle reconstruction the guest of the festival will have a chance to visit various interactive sites including the exhibition of military equipment and Field Hospital of the Red Army. 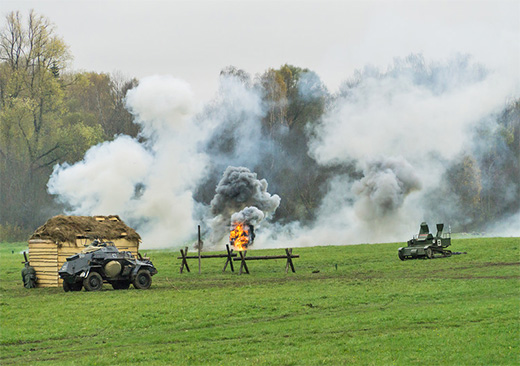