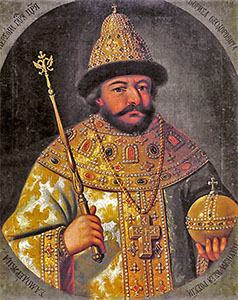 We recommend  you to visit the unique exposition lodged in the Bellfry of the Dormition Cathedral and in the One-Pillar Chamber of the Patriarch's Palace dedicated to one of the most controversial historical figures of the Russian history – Boris Godunov. This outstanding person with the amazing and, in fact, tragic destiny inspired a lot of artists, writers and playwrights. This time the guests of the Moscow Kremlin will have a chance to get acquainted with the first non-Rurikid tzar and learn more about his life and years of government.

The exposition includes about 150 exhibits from the main Russian Museums (The State Tretyakov Gallery, The Pushkin State Museum of Fine Arts, the State Hermitage, the State Historical Museum and others)  which belong to the  XVI–XVII centuries. The visitors will be able to see the unique icons, books, some examples of niddlework, jewelery and arms of the past epoch. The great part of these things were made on demand of Boris Godunov and his relatives. The important written memorials, rarity books and memorandums of the eye-witnesses are also of great interest. And, of course, the main body of exposition is represented by the displays of the Moscow Kremlin Museums – such as famous Monomakh's Cap (also known as Golden) and the throne of Boris Godunov.

The exhibition in Moscow Kremlin is open everyday except Thursday. You can buy the tickets either on of the museum or in the ticket office in the Alexander Gardens. Why not visit  this exhibition during your Moscow tour of the Kremlin?