Day of the City in Moscow International House of Music 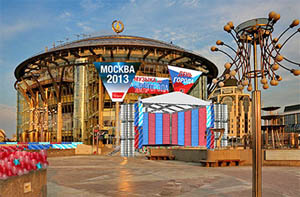 Moscow International House of Music prepared a unique program for the Moscow city day celebrations. Every music fan will have a chance to listen to open-air concert featuring international stars of classical and jazz scene; the admission to the event is free. A grand musical performance will take place in the square in front of the music hall.

The program will start at 6 pm. The visitors will have an opportunity to take part in numerous music completions, try on the role of a dancer or a musician. Many clowns and acrobats will be involved to make this day memorable for your kids.

The concert will start at 8 pm. It will feature  masterpieces of classical and jazz music as well as numerous popular songs. At night the square in front of the Music hall will become a perfect stage for fireworks on the banks of the Moscow river.