English portraits in the Tretyakov Gallery


23.04.2016 – 24.07.2016
Do you want to know what did the important personalities of English history look like? The UK-Russia Year of Language and Literature 2016 gives us an opportunity to participate in lots of interesting events. Thus the State Tretyakov Gallery in Moscow hosts “From Elizabeth to Victoria”  exhibition.  Visiting this cultural event you will see portraits of Oliver Cromwell, Horatio Nelson, Isaac Newton, James Cook, William Shakespeare, Robert Burns, Jerome K Jerome and many other famous people. 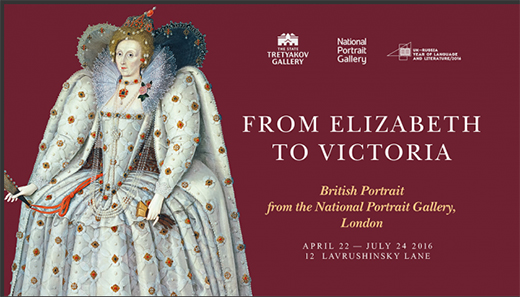 “From Elizabeth to Victoria” exhibition arrived from the National Portrait Gallery of London. In 2016 both museums celebrate their 160th anniversary. While British art-buffs get acquainted with the project “Russia and art: epoch of Tolstoy and Tchaikovsky”, Russian people have a great chance to see the portrait of 49 personalities well-known from their school program.
A real gem of this exhibition is the famous portrait of Elizabeth I - “Portrait from Dichly” by Markus Gerarts Junior.  On this canvas the queen is standing on the map of England, the sonet dedicated to her is on the write side of it. Another point of interest is a portrait of William Shakespeare. It is the first piece of art which was given to the National Portrait Gallery of London in 1856 on the date of its foundation.

Moscow tour guides hope that exhibition “From Elizabeth to Victoria” will impress you!