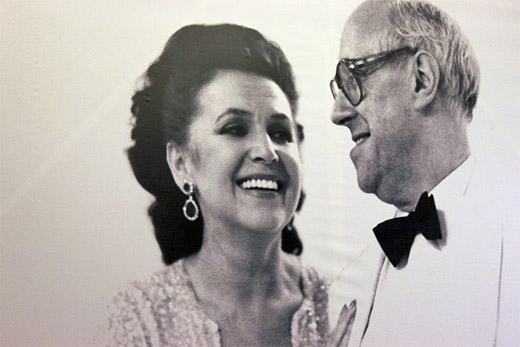 It takes place in the Glinka museum from April, 25 2012  through June, 30 2012. The exhibition narrates about two destinies of great Russian musicians, a prominent cellist Mstislav Ratropovich and  his wife , a world-known opera-singer Galina Vishnevskaya. This is a story not only about their professional and family union but also about their contribution to the society.

The exhibition includes some items from the family archives, as well as exhibits from the Bolshoi Theatre, the Glinka Museum, Solzhenitsyn's archives, the collection from Konstantonov Palace in St. Petersburg. Most of the family documents and photographs have never been shown before.

One of the biggest parts of this exhibition is devoted to a professional carrier of two musicians, their collaboration and friendship with prominent composers such as S. Prokofiev, D. Shostakovich, B. Britten, as well as outstanding artists such as P. Picasso, S. Dali, M. Chagall. Visitors will see Rostropovich's cello made by Amati, the manuscript of Concerto for Cello and Orchestra #1 by D. Shostakovich dedicated to Rostropovich, the Chagal's palette with inscription ''For my friend Slava – "uncle" Chagal". Various manuscripts and personal belongings including  Vishnevskaya's concert dresses and Rostropovich's gowns from top universities of the world of which he is an Honored Doctor.

You will also learn about an active civil position, years of emigration in 70s and a triumphant return of the starry couple in 90-s to Russia.

You might have a guided tour of this exhibition with our Moscow tour guide or  visit it on your own.