Even if you are not a connoisseur of aero and space-system engineering the world-famous Russian air-show MAKS held near Moscow on Zhukovskiy LII air field every summer is really worth visiting. MAKS is an acronym for Mezhdunarodnyj aviatsionno-kosmicheskij salon translated as "International Aviation and Space Show". If you plan your Moscow tour in August you might attend this interesting event to learn more about innovative projects of Russian engineers, see with your own eyes the magical air program performed by the real aces and take photos of the most famous Russian planes. 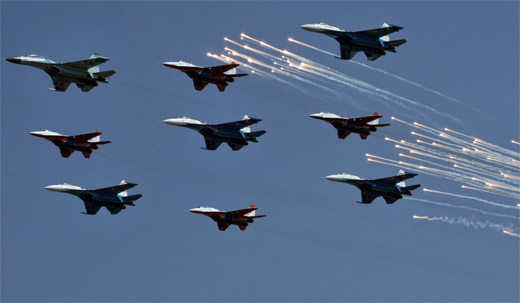 During the air-show the guests will be able to see the breathtaking performances by the famous aerobatic teams  “Russian falcons”, “Golden Eagles”, “Taurida Wings” and “Baltic Bees”. The most expected participants of MAKS are unique “Russian Knights” - the only team in the world performing formation aerobatics of heavy fighters. It should be mentioned that these fighters are of series production. While visiting the International Aviation and Space Show don't miss the performance of “Swifts” (a group of MiG-29 fighters) demonstrating such flying formations as a “pyramid”, “hammer”, “star”, “arrow”, “cross” and “wing”.

Moscow tour guides suggest that you visit of this event. Here you can buy tickets, learn more about the participants of the international air-show and see the exhibition complex map. We wish you an excellent pastime!