The first week of spring welcomed Muscovites with severe frosts. It makes it hard to believe that  winter is coming to its end. And only the sun brings optimism to our hearts.

This year the first days of March coincided with a traditional Russian Spring festival called 'Maslenitsa'. In pagan times it was a sun-festival, celebrating the imminent end of winter. Nowadays Maslenitsa is also a Christian holiday. It marks the last week before Great Lent. For the religious people it might be the last chance to feast and make fun before a long period of fasting.

These days people traditionally eat blinis (Russian pancakes, similar to the French crepes) popularly taken to symbolize the sun. Maslenitsa is a festival of eating, drinking and merrymaking. There're lots of popular traditions that are still alive today. Among them are Troika rides, sledding, theater, puppets, singing, and fireworks. There is usually a "storming" of a snow fort. As the culmination of the celebration, on Sunday evening, Lady Maslenitsa (a straw feminine figurine) is stripped of her finery and put to the flames of a bonfire.

Those planning Moscow tours the following week are welcome to participate in numerous festivals held throughout the city. 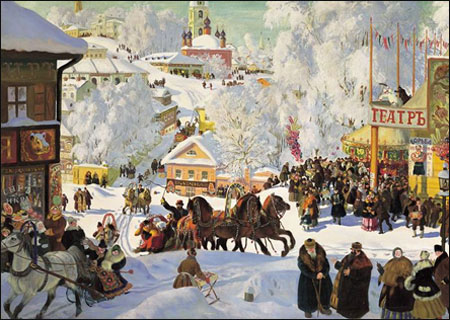 Vasilevsky Spusk (the area between St Basil's cathedral and Moscow river), March 4-6
This year it'll be the 10th time of Maslenitsa celebration. Therefore, it's going to be particularly interesting.  Clowns and puppets will be waiting to entertain all guests. The program will include funny competitions and traditional Russian games: the battle of bags on a log, walking on stilts. A 6-meter sledding hill will welcome all fun-loving visitors.
According to an Old Russian tradition the celebration will end on Sunday, the last day before Lent. This day the folk Festival "ROSGOSSTRAKH Wide Carnival 2011" will be held. The festival will feature teams from 10 cities of Russia who are going to perform traditional Russian songs and dances.
The festive culmination of the day will be burning the Lady Maslenitsa figurine. The day will be finished with fireworks and Russian pop stars performances. 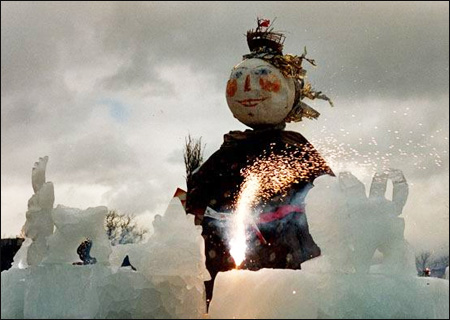 Burning of Lady Maslenitsa in Kolomenskoye

Kolomenskoye, March 4 – 5
At 13.00  a theatrical performance will begin at the large field in Kolomenskoye. It'll be accompanied by traditional games and competitions with sweet prizes, hilarious clown shows and comic fights.
At the entrance of the metro station Kashirskaya another stage will be set up. Here from 10.00 to 19.00 the guests will be entertained by funny clown performances. Right on the street there will be a pancake market with hot food trade, pretzels, honey cakes tea and handicrafts.
At 16.00 at the stage on the Moscow River embankment their will be "Welcome Spring" show. The audience will get acquainted with funniest and most unusual rituals and traditions of the Pancake week.
From 10.00 to 22.00  all guests are welcomed at the carnival fair with delicious pancakes, cakes, hot tea, and colorful souvenirs. Numerous attractions, Russian swings and roundabouts will be operating.

Open world club (18 Pavlovskya street, March 1 at 19:00-20:00; March 3 at 14:00-15:00; March 4 at 19:00-20:00 )
A master class on making Maslenitsa dolls.
In old times the dolls were talismans that kept children from evil and gave health to the families.
Traditional dolls had no face, as it was believed that human-looking dolls could acquire a soul and harm the baby. These dolls are made without a needle or scissors. Maslenitsa doll was considered a guardian of the house. It was kept the whole year and the next holiday it was burned or put on the water. During this class you'll learn how to make this traditional talisman. 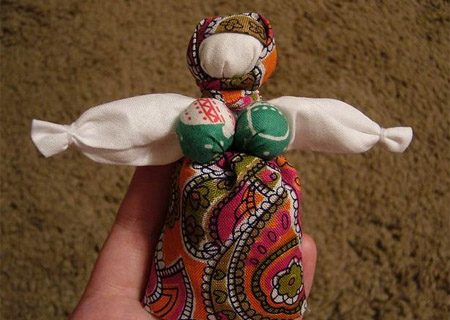 
VVTS (former  VDNH), March 5- 6
The celebrations will start at 12.00 at the stage close to "The Central" N1 pavilion. The visitors will watch a music program and listen to traditional folk songs. All volunteers will have a chance to practice bow shooting, fencing and participate in other popular games.
During these two days the festival of pancakes will be held in VVTs, where you can indulge yourself in delicious Russian blinis with different fillings together with some hot tea.
The festival will finish with the traditional burning of Lady Maslenitsa straw effigy.
Tsaritsino, March 6,  12.00 – 17.00
Main events will take place at two corners of the park, in the vicinity of the metro stations Tsaritsino and Orehovo. The guests will have a chance to listen to folk music, try tasty pancakes and participate in numerous competitions.
At 17.00 there will be a folk concert inside "Hlebny Dom" (one of the palace pavilions). The guests will not only listen to traditional Russian songs but will also participate in Russian wedding games.

Bakshevskaya maslenitsa, March 6
Bakshevskaya maslyanitsa is an annual informal and non-profit festival. It takes place in Moscow countryside forests. Celebration is held annually since 1986. Despite the fact that the venue of the festival is not published anywhere, but only transmitted by word of mouth, the feast attracts thousands of people. In 2010 there were about 4000 guests coming. The most beloved event of the holiday is the seizure of a large snow fort. Other folk games include climbing a 10 meter pole, wall to wall fighting, singing folk songs. 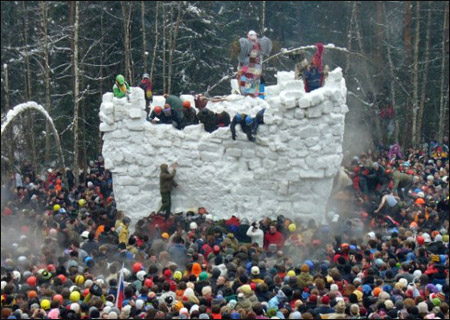 Storming of a snow fort outside of Moscow

Curious to participate in this most informal celebration? Our Moscow tour guide can accompany you to this place.