If you plan to visit Moscow this spring, don't miss a chance to visit one of the rehearsals of the Victory Day parade that will take place on Red Square on the 9th of May. The first of them will be held on the 28th of April, the second –  on the 5th of May, the general – on the 7th of May.

On both April 28 and May 5 the military equipments will appear on Moscow streets at 6 pm and move in the direction of Red Square to participate in rehearsals starting at 10 pm.
On May 7 and May 9 the column of military hardware might be seen starting from 6 am before it will reach Red Square at 10 am. 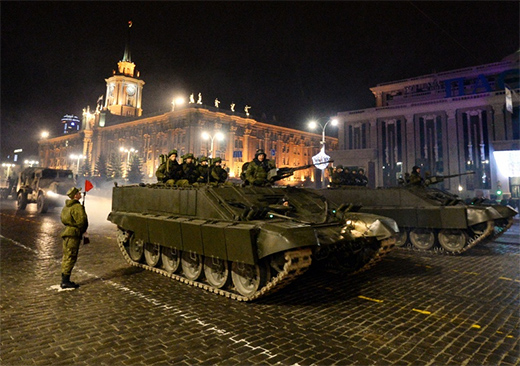 On the 9th of May more than 10 thousand soldiers and 170 units of heavy military equipment will participate in the traditional Victory parade. This annual event marks the Allied victory in the Second World War at the Eastern Front and the signing of the German act of capitulation to the Allies in Berlin in 1945. In 2016 for the first time in Russian history women officers and other ranks of the Armed Forces will march on Red Square.

During the rehearsals the procession will follow the route:


There are a lot of places in Moscow from which you will be able to see the aviation show on the 9th of May. The most popular of them are Leningradsky Prospect, 1st Tverskaya-Yamskaya Street, Tverskaya Street and Raushskaya quay. Planes and helicopters will fly at the end of the parade, at 10.45-11 am. Moscow tour guides recommend that you see the aviation from the side of the streets where buildings with uneven numbers are situated. We wish you good luck and hope that Victory Parade in Moscow will impress you!