16.03.2016 – 27.03.2016
Irish Week dated to St Patrick's Day traditionally celebrated on the 17th of March starts in Moscow this Thursday. This Catholic holiday commemorates Saint Patrick and the arrival of Christianity in Ireland and celebrates the cultural heritage of this beautiful country. Moscow tour guides prepared for you the brief program of this interesting cultural event that will help you to plan your free time. 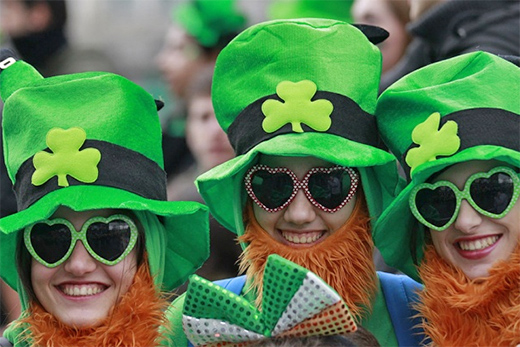 On the 19th of March at 12.00 in Sokolniki Park the traditional St Patrick's Day Parade and Concert will take place. The Parade held in Moscow for the 24th time will mark the anniversary of the passing of Ireland's Patron Saint, St Patrick on March 17th, 461 AD. After the end of this procession Irish music lovers will enjoy the free concert followed by all-night Gala-Festival of Irish Music in Izvestiya Hall club. The tickets for the evening show ' DAY & NIGHT' will be sold beforehand of Irish Week.

From 16th  up to 27th of March the 9th Irish Film Festival will be held. The visitors will have a great opportunity to see the screenings of the award winning Irish films like 'Michael Collins', '1916: the Irish Rebellion', 'Room', 'Brooklyn' and others. The films will be shown in English with Russian subtitles.
Moscow tour guides hope you will have an unforgettable time during Moscow Irish Week!