Night at the museum festival will be held in Moscow on May 17-18. This day over 200 museums will be open till midnight and even later. Most venues will not just extend their working hours  but prepare numerous entertainment programs;  theatrical performances, music concerts, free tours, workshops and master classes. 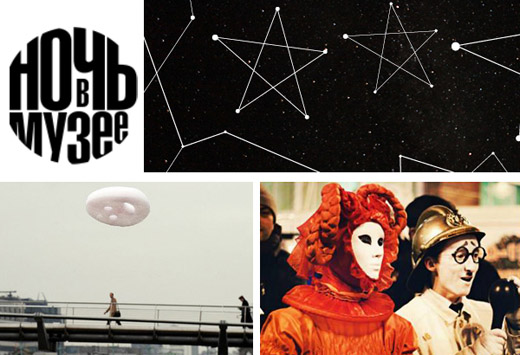 On may 17 most  museums and exhibition halls will work for free from 10:00 to 18:00. Some museums offer free tours and games for their visitors. This day you can also attend a free walking tour of Moscow (over 20 tours have been organized) and see the interior of architectural monuments that are usually closed for regular visitors. Thus you can go inside Moscow City Hall , Grand Kremlin Palace, Petrovsky Palace, Lenin Library, Pashkov House, Shechtel mansion. Such tours are very popular and you will need to sign in as early as possible.

If you are planning a tour of Moscow this day we recommend you to study the official websites of the event. provides information about tours and events in Moscow during the day. is devoted to the events held at night-time.  Both websites are in Russian only but your Moscow tour guide can help you to find your way.

This night lots of events will be held outside. British curator David Green will present an open air Video Art Museum: a giant screen will show video hits from around the world. Walking around Moscow this night you can see numerous art objects and installations, listen to jazz, blues, classic music and watch contemporary performances.