30.10.2014 – 01.02.2015
The Moscow Museum of Modern Art reveals the new faces of Spanish genius within the exhibition “Salvador Dali and Media”. If you have free time till the end of January, take a chance to get acquainted with Dali-illustrator, editor and art director. Visitors of the exhibition will be able to read controversial articles about the most expensive surrealist artist, who gained an anagram nickname “Avida Dollars” (in Latin it means mammonish), watch some curious commercials with Dali participation, and see lots of recognizable master's fantasies realized through magazine’s illustrations. 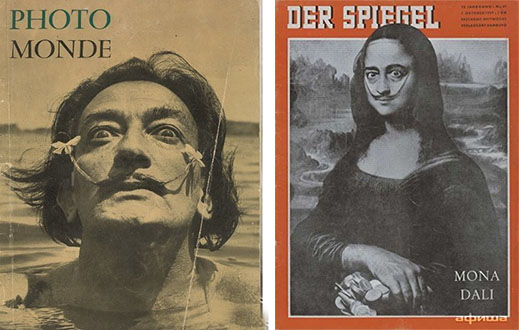 Exposition “Dali and Media” has actually nothing to do with chronology. It is symbolically divided into two parts. The first one unites Dali's works for such magazines as Vogue, GQ, TV Guide, Newsweek, Town&Contry and the second - symbolizes the world of master's images including well-known giant egg, women legs in the Bryans stockings, lips and freakish mustache. Intriguing notes about different spheres of the artist's activities alternates with some interesting statistics giving an idea about number of his editions, covers and fees.

Guests of the exhibition, organized by the Gala-Salvador Dali Foundation, nevertheless can trace the evolution of Dali-illustrator – from the works for the intellectual magazines like “L'Amic de les arts” or “Gaseta de les Arts” to glossies for the consumer society. Being an eccentric Salvador Dali used media as a great area for the experiments. Thus in 1945 he edited a kind of imitation of famous newspaper Daily News which was named immodestly - Dali News.

You can visit this exhibition during your Moscow tours and learn more about the unique artist who could make a show even out of his own death.