21.12.2011 – 08.01.2012
The International Christmas Festival is taking place in Moscow for the forth time. This year's festival is devoted to the culture of "good old Europe". Top musicians from Italy, France, Austria and Estonia, together with Russian performers will present the famous masterpieces of medieval, baroque and contemporary composers. 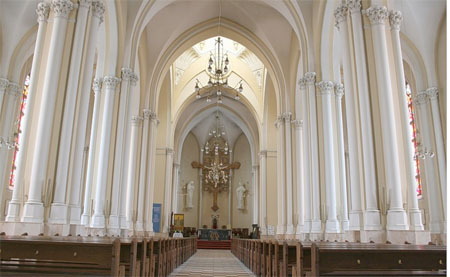 Among the highlights of the festival is the mystery by Vladimir Martynov "The games of angels and men" and the concert program of the famous Viennese Ball by the famous Morphing Vienna Chamber Orchestra. For the first time in Russia the glorious oratorio "Our Lord Nativity" by Lorenzo Peroz will be performed.

In addition to concerts of sacred music, the festival will also feature photo exhibitions,
round-table discussions, workshops, competitions and fairs. Thus you can see a photo exhibition "Starry space: Big Picture" which will present the unique images from Vatican Observatory.

The festival runs until January 8, uniting the traditions of European and Russian Christmas. Everyone willing to listen to church music of different countries is welcome to visit Moscow catholic cathedral of the Immaculate Conception of the Holy Virgin Mary, Tchaikovsky Concert Hall and the Contemporary Art Center M'ARS. Enjoy the Christmas atmoshere during your tour of Moscow!