You can watch the Victory parade rehearsals othree times before May,9 in Moscow 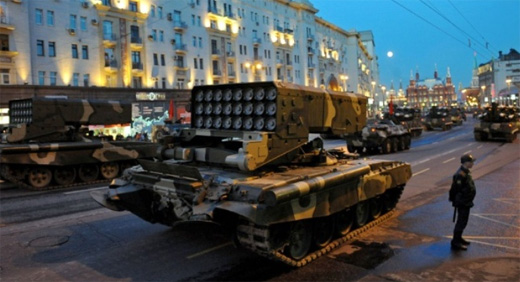 Where to see the military hardware?

Military hardware  can be found on the route of its movement from Khodynka field to Red Square and back (Khodynsky field, Aviakonstruktora Mikoyan street,  Aviakonstruktor Suhoi street, Leningradsky prospekt, 1st Tverskaya-Yamskaya street,   Tverskaya street, Manezhnaya Square, Red Square, Vasilevsky Slope and further along the Kremlin embankment, through Mokhovaya street,  Vozdvizhenka street, Novy Arbat street to the intersection of the Garden Ring and Triumphal Square, back to Khodynskoe field

The column of military hardware leaves Khodynka field on April, 29 and May, 4 at 6 pm and on May,7 and on May,9 at 7 am. You may come to Tverskaya street (between Mayakovskaya and  Pushkinskaya metro stations)  on May,4 at about 8 pm. Usually at this time  the column is being formed along Tverskaya street.

It might happen that access to Tverskaya street and a lot of others  in city center will be closed on May,9. You may watch the tanks when they return from the parade - on Novy Arbat, the Garden Ring, or on  Leningradsky prospect (possibly at  building 33 not far from Dynamo metro station)
Aircrafts and helicopters will fly closer to the end of the parade - at 10.45 - 10.55 am  above Leningradsky prospect, 1st Tverskaya-Yamskaya street, Tverskaya Street, Red Square, Raushskaya embankment and then - to the airport.

If you are planning your Moscow tour in early May you'll see lots of preparations for the 70th anniversary of Victory in WWII.