Home → Moscow events → We have created the capital from Moscow

We have created the capital from Moscow 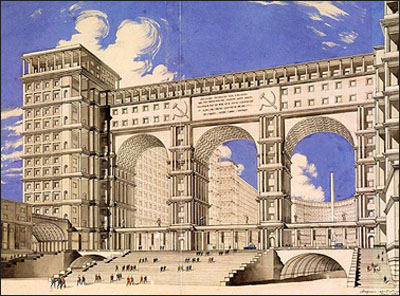 The exhibition in the Architecture museum takes us back to the 1930s. It was the time when the appearance of the Soviet capital was changing dramatically. Old provincial Moscow was disappearing forever. Soviet architects turned it into a modern city with wide avenues, large squares, granite embankments, subways and beautiful houses.

The exhibition "We have created the capital from Moscow"  is devoted to the 80s anniversary of Moscow Construction Union Mosproject-1. Here you'll see the masterpieces of the Soviet architecture of the 30-s.  Looking at impressive graphic collection you'll have a chance to get to know the leading architects of the time: Schusev, Fomin, Zholtovsky, Melnikov, Golosov, Vesnin and others.

Many of the architectural projects you see would never be materialized. They look fantastic, utopian and it's almost impossible to imagine those buildings in the modern Moscow. Other works look more real. Take for example the project of Narkomtazhprom by Fomin (see picture above). It's a very typical totalitarian art, it looks impressive, isn't it? But could you imagine this giant  built on Red square on the site where you see GUM today?

Sometimes you can recognize certain projects in the architecture of the modern Moscow. This is Chechulin's project (1934) of the central Aeroflot building which was to be erected on the square beside the Byelorussky railway station. (This project was never realized) 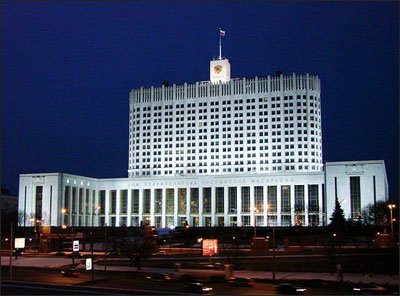 
And this is the White House of Moscow built by Chechulin in 1979. 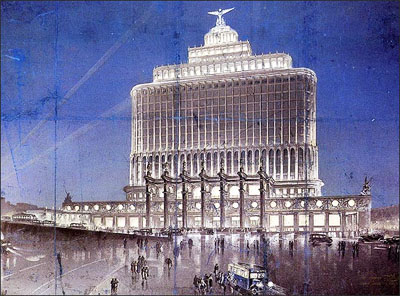 
At the exhibition you can watch fragments of the movie "New Moscow". There're no English subtitles but you don't need the language to understand it. It is a Stalinist utopia about the ideal city of the future. The project of Moscow reconstruction is materialised by the Soviet animation, you'll see the new city with mpressive tall buildings, wide avenues and  granite embankments. This movie evokes very mixed feelings.  Some viewers will probably like the idea of living in such a beautiful "perfect" city. But after watching chronicles with churches and old houses being blown up you can't remain optimistic any more. "New Moscow" meant to highlight glory and power of the new Soviet capital  ended up to be like a requiem to the city, destroyed by the Bolsheviks forever.

If you're interested in architecture we recommend you to visit the exhibition "We have created the capital from Moscow". The museum is in the very center of the city, you can easily find time for it during your Moscow tours.