Assembly of the Nobility 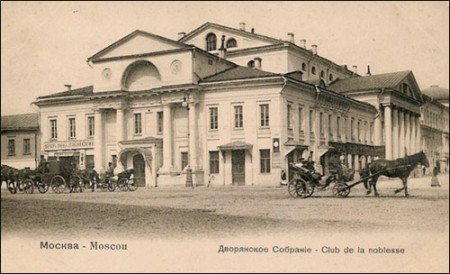 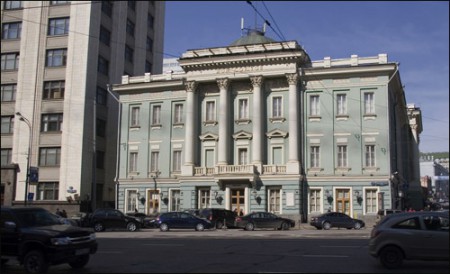 House of the Unions, Moscow, 2008
Nobility's Assembly Rooms was initially a private noble estate. It was built in the first half of the 18th century and belonged to Moscow Governor General Vasili Dolgorukov-Krymsky. It was later purchased by the Moscow Assembly of the Nobility to serve as a clubhouse. A famous Russian architect Matvey Kazakov redesigned it in 1780-s.  In particular, he added the monumental Column Hall  in place of the interior yard of the estate.

The whole of aristocratic Moscow would gather here for the most brilliant balls. They would spend summers abroad or in their country estates, but winter was the party time in the Moscow club. Tolstoy described this house in 'War and Peace'; it was here where the dancing master Yogel gave his famous balls.  Russian poet Pushkin was a frequent guest in the club, a description of a ball in the Assembly Rooms is included in his poem Yevgeny Onegin.
There's a wonderful concert hall in the Assembly Rooms. Several memorable concerts were given here by Chaikovsky, Rimsky-Korsakov, Lizst and Rachmaniniov.

After the October Revolution the Soviet government transferred this house to the trade unions, and it came to be known as the House of Unions. In January 1924 crowds flocked here to participate in the funerals of Vladimir Lenin. In Soviet era it became a tradition that the coffins of high officials including Stalin were placed here for the public to pay their last respect.

Today numerous congresses, conferences and concerts are held in the House of the Unions. This famous building is located close to Bolshoi theatre; you'll see it during your Moscow tours.