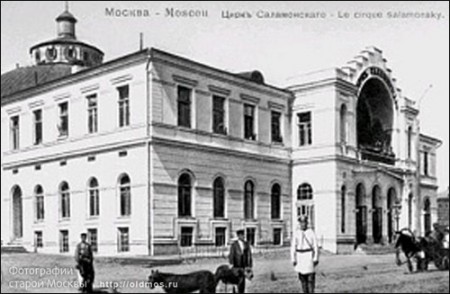 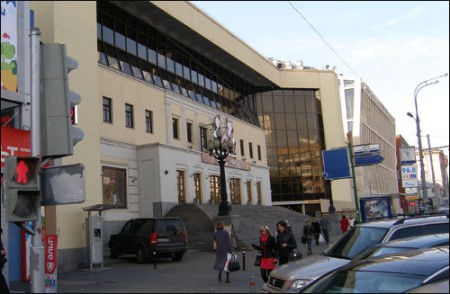 Moscow Nkulin circus, Moscow, 2010
Moscow Circus on Tsvetnoi Boulevard is one of the oldest circuses in Russia.  Its history began over 130 years ago. The first performance took place there on October 20th, 1880.

The founder of the circus was a horse rider and gymnast Albert Salamonsky who also appeared to be a shrewd businessman. He found a perfect location on Tsvetnoy Boulevard. At that time boulevard was a popular destination for Muscovites, who came here to see numerous fairground attractions such as traveling menageries and theaters.

What's interesting is that before Salamonsky circus performances were never meant for the children. Salamonsky first realized that children were wonderful audience for the circus and that this could help him to make more money.  Moscow Circus was the first to adapt programs for the child perception. There were morning performances on Sunday. Salamonsky put children's ballets and pantomimes. One of them, "Fairy Doll", was released in 1895 and has been popular for many years.

All the celebrities of the former times performed in its arena. But its clowns, who were the circus' main attraction, were the audience's favorites. "It's no good when the circus audience laughs little", the founder of the Moscow Albert Salamonsky used to say. The best Russian clowns, including the legendary "sunny clown" Oleg Popov, Leonid Yengibarov, Karandash, Leonid Kukso, and many others, performed in the Moscow Circus.

However, the most beloved "star" of the Moscow Circus was the famous clown and actor Yuri Nikulin, who later became its director. Though people knew many of his remarks by heart, they went to the Moscow Circus again and again, just to see him on the arena once again. Now the Moscow Circus on the Tsvetnoi Boulevard is named after him.

The Circus building we see today is the result of reconstruction in 1985 - 1989. Moscow Circus on Tsvetnoi Boulevard is famous all over the world. It offers  spectacular shows with caberet, clowns, acrobats and animals.Why not come to see its performances during your Moscow tours?