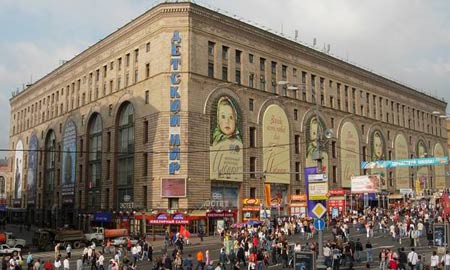 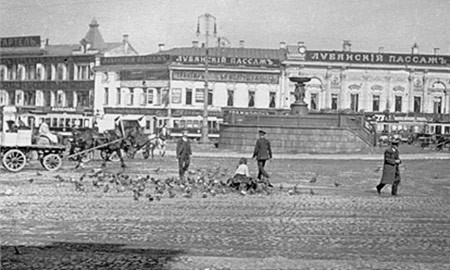 
The world of joy, happiness and dreams was experienced by Soviet children in a famous toy store known as Detsky Mir which in literal translation means "Children's world". The largest toy store in Europe was constructed in 1957 by a well-known architect, the author of presumably the most brilliant metro stations such as Mayakovskaya, Proshchad Revolyutsii, Kropotkinskaya, Paveletskaya as well as one of the Stalin's sisters at Krasnye Vorota. This building combining laconic facade with glass elements and arches reminds one of Italian palazzo interpretation.  It appeared on Lybyanka square in the vicinity to the KGB building and successfully completed the architectural image of the Square.

This toy store replaced the shopping arcade which is seen in the old photo, however, it did not change significantly the meaning of the place. In the white-and -black photo one can find a fountain with drinking water which used to be located in the center of the square. It was removed in Soviet times.

Nowadays, once famous toy store, Detsky Mir,  is undergoing the renovation as well as the Russian government politics with respect to birth rate and child care.

Today one can see only the exterior of this building during your Moscow tour, but hopefully "Children's world" will open its doors to kids in the nearest future.