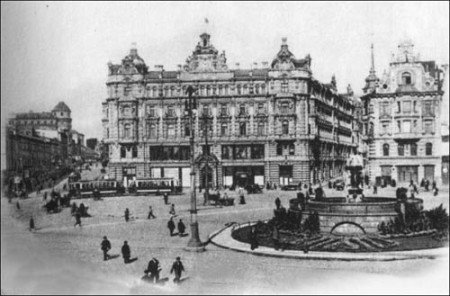 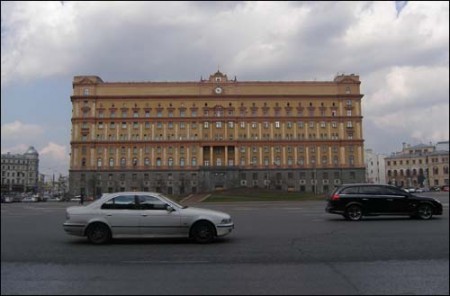 Lubanskaya squre, Moscow, 2010
Lubyanka Square is an old central square of Moscow, it is not far from Red Square. The name was first mentioned in the 15th century, when Ivan III settled many Novgorodians in the area. They called this place after Lubyanitsy district of their native city.  Today "the Lubanka" brings back memories of the darkest Soviet past; this is a popular name for the headquarters of the KGB and its prison.

Before the Revolution the square was dominated by  elegant Neo-Baroque headquarters of the All-Russia Insurance Company. It was designed by Alexander  Ivanov in 1897. The elegant buildings we see in the old photo accommodated apartments, shops and offices. In the center of the square there was a fountain with fresh water. Thousands of Muscovites would come here to collect water for their houses.

After the Revolution the house was taken over by the Soviet secret police, then called the Cheka. The house in the center of the square was later known as the KGB building. In Stalin's time this notorious institution was responsible for repressions and tortures. According to a popular joke the building was called the tallest building of Moscow, as prisoners could see Siberia from its basement. Today this building houses Federal Security Services.

Not far from here you can find the Gulag museum. The museum is devoted to the gloomiest period of our past. Those interested in the Soviet history may come there during Moscow city break.